The Greenland seal lives in the Arctic parts of the North Atlantic, primarily in areas where drift ice is present.

The harp seal belongs to the true seal family (Phocidae). Their pups have white fur at birth (whitecoats), which they lose after two or three weeks. While moulting, they are called “lurv” (mops) in Norwegian and, once they have acquired their new, dark, short-haired fur, they are called “svartunger” (blackcoats) in Norwegian and grey coats in English. For the rest of their lives, they replace their coat every year and gradually acquire a lighter colour with dark, irregular patches. During this period, they are called “brown seals” in Norwegian, a term that covers both immature and sexually mature animals. At about the age of ten, they acquire black heads and a light, almost white body with a saddle mark on their backs. Once they have acquired this characteristic colour pattern, they are called saddleback seals or “old dogs” in Norwegian. Harps seals live to about 30 years of age.

Adult harp seals reach up to 1.9 metres in length and can weigh up to 200 kg. Both sexes are roughly the same size. At birth, their pups are about 1 metre long and weight about 12 kg. During the two-week long suckling period they are quickly fattened up to more than 30 kg when they are weaned. Once they have replaced their coat after three weeks, they will have lost 5–10 kg before they leave the ice to find food on their own.

The harp seal is only found in the North Atlantic. In late winter every year, they gather in three main areas to give birth to their pups on the drift ice. These are on the east coast of Canada (outside both Newfoundland and in the Gulf of St. Lawrence), in the Western Ice north of Jan Mayen and in the Eastern Ice in the White Sea. Mating takes place at the end of the suckling period and the adult seals search briefly for food before gathering again on the drift ice, this time to moult. Young animals and males first and then sexually mature females.

Outside the breeding and moulting seasons, harp seals search for food along the edge of the ice and in open waters across large areas of the North Atlantic. Typically, harp seals occur in large flocks in their feeding areas. Their diet varies from area to area and depending on the time of the year. In the Barents Sea, the harp seal is very abundant, and its consumption influences other resources. Capelin is an important prey in the Barents Sea and the harp seal's choice of food is probably influenced by how much capelin is available. One estimate based on 2.2 million seals showed that their total consumption in the Barents Sea was about 3.37 million tonnes in years with a big capelin population. Capelin consisted of a quarter of this, but Arctic cod and krill, which are the second most important prey, together made up 36 percent of their consumption. In years where there is little capelin, consumption was estimated at 3.49 million tonnes. This was since the harp seal was then forced to eat a somewhat poorer diet, in which the proportion of Arctic cod increased.

Modelled population size of harp seals in the Greenland Sea and catch level 1946–2019: 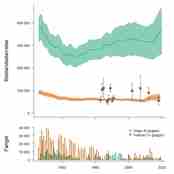