How can you get world-leading experts to provide specific recommendations on how to ensure that the oceans remain clean and productive for the future? By breaking down barriers between fields and by having good “table secretaries”.

160 of the world’s leading ocean experts have gathered in Bergen this week for the conference “Science for Ocean Actions”, organised by the Institute of Marine Research (IMR).

The aim of the conference, which was launched by the Norwegian Prime Minister Erna Solberg at the G7 summit in the summer, is to propose specific measures that Erna Solberg’s High-level Panel for a Sustainable Ocean Economy can use to help ensure that the oceans remain pure and productive for the future.

One of the experts who has been in Bergen this week is Pawan Patil of the World Bank. He is full of praise for how discussions have been organised at the conference.

“This particular round table, where the focus is on action coming from ocean science, is first and foremost what differentiates it from many other round tables like this that have happened around the world for many, many years”, he says.

The other distinguishing feature of the conference is the composition of people, according to Patil.

“Since when do you have deep scientists, bankers, development practitioners, health and nutrition specialists, all coming together” he asks.

“These communities in the past have been separated and siloed. This round table has actually broken the silos, putting us all together and being able to figure out how to better understand each other’s language for very specific solutions that can be deployed that are evidence based”, he adds.

Work has now started on gathering all of the knowledge shared by the experts, so that politicians and decision-makers around the world can eventually use it to formulate specific actions. But how can you turn the thoughts of 160 researchers covering a wide range of fields into specific actions?

The answer is by organising systematic discussions and having “table secretaries” from the IMR.

At the end of each of the six topics covered at the conference, the specific topics were discussed by the researchers sitting around the various tables in the room. Each table had a researcher or postdoc from the IMR noting down the most important measures, referred to as action points, mentioned by the experts.

“We’ve sat and listened and noted down the action points suggested, and we’ve even made some of our own suggestions”, says Sindre Vatnehol, who was one of the “table secretaries”.

He explains that the job was both hectic and enjoyable.

“You learn a lot. You get a much better understanding of what your role is. Of where your research fits into the overall system”, he says, and is backed up by Elin Sørhus, who was the “secretary” at a different table.

“You get the big picture, the bird’s-eye view, the global perspective”, she says.

Tyres made from algae

The two IMR researchers feel that many good suggestions were made. Some were slightly more humorous than others.

“Tyres are of course responsible for a lot of the plastic in the oceans, so someone said ‘why not make tyres out of algae?’? Maybe in the future we’ll have to changes tyres much more often”, says Sørhus and laughs.

“I think there have been a lot of good suggestions. Obviously people were inspired by the lectures ahead of the discussions – that was the whole point, after all”, she adds.

Vatnehol also has the impression that both the lectures and panel debates before the round-table discussions were useful to the ocean experts.

“They all come from different fields. So they say things that some of the other people haven’t thought of. You notice that several people suddenly realise something”, says Vatnehol.

Each “table secretary” will submit a maximum of three pages to be used in the final report on the conference.

The results of the conference in Bergen will go to the High-Level Panel’s expert group, which includes Peter Haugan of the IMR.

“The design of this conference seems to have been very useful, because the researchers have been asked to propose recommendations, and you can see that many of them have done that”, says Vidar Helgesen, the special representative of the High-level Panel.

Eventually a research report will be produced, which will inform the work of the High-Level Panel of heads of state and heads of government.

“But they won’t deal with the research report itself. The final stage of the process is that the panel will agree on policy recommendations. So it is a very research-based approach, even at the level of heads of government”, says Helgesen. 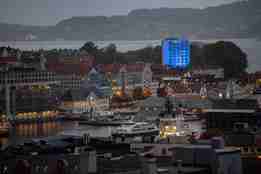 The Institute of Marine Research is hosting the conference (Photo: Eirik Hagesæter)