Checking the state of all life in the Barents Sea

Since 2004, Norwegian and Russian marine scientists have been getting to know the Barents Sea inside out through their annual surveys. This year four vessels are covering well over 200 sampling stations across the whole sea from Tromsø, in the south, to Svalbard in the north and Novaya Zemlya in the east.

Counting the fish to come

Since the survey is part of a time series, the marine scientists can monitor the trends in this important sea. They have, for example, been able to show that fish in the Barents Sea are moving north as a result of climate change.

Their findings make it possible to provide advice to the authorities on how much of the various fish stocks can be harvested sustainably. The number of cod and capelin approaching maturity gives an idea of how their populations will develop over the coming years. And in the ecosystem, everything is intertwined.

What do scientists actually do on these surveys?

On the 7th of September the research vessel G.O. Sars set out from Tromsø on the first of two legs.

At each station the crew and scientists take a number of samples that they use to interpret the results of echo sounding, amongst other things. 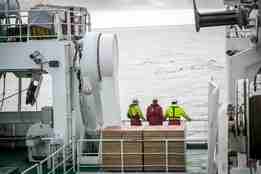 The first thing they do is to catch fish. Initially with the pelagic trawl. It targets fish and other animals that swim freely in the water column.

“One of the most important things that we catch in this trawl is the 0-group. In other words, the cod, haddock and capelin that hatched earlier in the year. Together with images from the echo sounder, our catch gives an indication of how many offspring the fish produced”, explains researcher Erlend Langhelle.

“The number of fish growing up is important to the other species in the ecosystem, and in due course also to the fishery.

The researchers sort everything that has been caught in the trawl, counting and weighing the individual specimens. They also have to take out the otolith, stomach and other organs from some of the fish. The otolith has growth rings that the technicians can count under a microscope.

Fishing for plankton with a net

After the first trawl, the boat stops. The crew lower two scientific rigst to the bottom of the sea and bring them back up again. One is for sampling water, and consists of a myriad of cylinders in a frame with different wires and mechanisms. It brings water from various different predetermined depths up to the surface.

The technicians sample the water into small bottles that will be analysed back on dry land. The analysis will tell them how much chlorophyll, or phytoplankton, is in each water layer. Phytoplankton provide the basis for all other marine life.

The second piece of equipment is a net with a fine mesh that catches zooplankton. The second link in the food chain.

“We sieve the catch through three different filters to sort the animals by size. The smallest ‘specks’ are copepods like Calanus. The bigger animals include arrow worms and krill”, says technician Alina Rey.

Finish off by bottom trawling

As they leave the sampling station, the crew perform a bottom trawl to catch the animals that live in and on the sea floor. For the technicians, sorting through them can be a bit of a job.

“We get demersal fish like cod, flounders, beaked redfish and wolffish. Then there are shrimps, crabs and all the weird creatures that live at the bottom of the sea. We call this fauna benthos”, says Erlend Langhelle.

The survey is particularly important in terms of the capelin population, as the findings are used by scientists to calculate the size of the population and how much can be harvested sustainably. This year Norwegian and Russian fishers were allowed to harvest 205,000 tonnes, whereas in 2017 there was no capelin quota.

They also look to the sky

When the ship is steaming along between stations, there are always three observers in the bridge. Two of them record sea mammals and rubbish floating on the surface. The third one counts birds.

“Every ten minutes I take a mental snapshot and make a note of the various sea birds in front of the boat. This annual survey is particularly important in times of global warming”, says bird observer Trevor Charlton.

Check for radioactivity at selected hotspots

At some of the stations, the researchers take special samples to check the pollution levels in the water, sea bottom and fauna. Regular monitoring of this kind helps to ensure that the seafood we eat is safe.

Using a special grab, the scientists bring up a quarter of a square metre of sea bottom totally intact in a box. From this “slice of cake”, they take a core sample in which each layer represents a few years of sedimentation, but also of pollution.

“From the core we can recognise major pollution incidents in the past. The Sellafield and Chernobyl accidents can be found in their separate layers”, says researcher Hilde Elise Heldal.

When the G.O. Sars docks in Longyearbyen after completing the first of its two legs, it has visited 55 stations. The scientists have taken samples of 17,000 animals from the sea and the ship has stored 2.6 terabytes of echo sounder images. Its freezers contain livers, stomachs, krill, microplastics, sea floor samples, sea cucumbers and snow crabs.

The G.O. Sars will visit a further 64 stations before finishing its journey in Kirkenes at the end of September.

You can see lots more photos from the ecosystem survey in the Barents Sea on our Facebook page.

Facts about the G.O. Sars

Amidtships is a large "environmental hangar" containing six winches which carries up to 6000 metres of cabel for lowering instruments to the deepest parts of the sea.