On 24th of May 2019 in the Palais du Luxembourg in Paris, François Houllier, Managing Director of the French Research Institute for the Exploitation of the Sea (Ifremer) and Sissel Rogne, Managing Director of Institute of Marine Research (IMR) sign the renewal of a "Memorandum of understanding" which will govern and facilitate the scientific cooperation between the two institutes.

After celebrating a hundred years of French-Norwegian cooperation in the Norwegian Embassy on the 23rd of May, the signing of this bilateral agreement marks the will of these two leading institutes in European marine research to increase and strengthen their collaboration.

"France and Norway are two great maritime nations; in the aftermath of the G7 conference held in Metz, they have recently decided to jointly support scientific initiatives and international mobilization on biodiversity and climate, says François Houllier, Managing Director of Ifremer.

"Ifremer and IMR have been working together for a long time in areas of the marine environment: this has resulted in joint participation in European projects. It is in this context and to support this dynamic that the two institutes have decided to formalize their collaboration by signing a five-year framework agreement ". 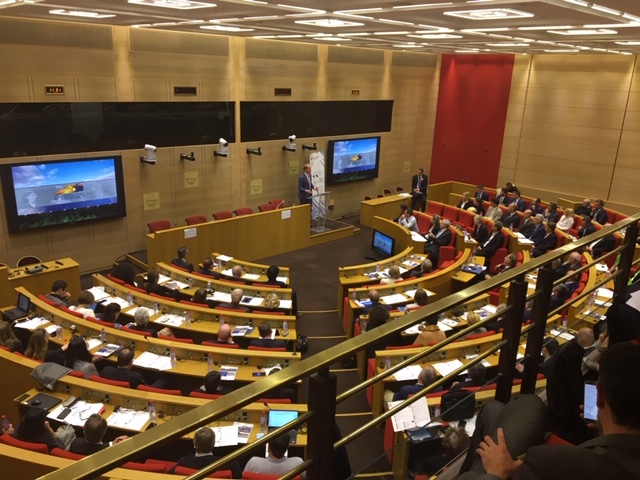 Venue for the signing ceremony was Palais du Luxembourg in Paris. (Photo: Ifremer)

“Ifremer and IMR are the two largest marine research institutes in Europe, the former is located within the EU and the latter outside the EU. At IMR we have reassessed our network of cooperating institutes and made some strategic choices, one of which is to prioritize collaboration with Ifremer. Together we can increase both efficiency, quantity and quality of data collected at sea which can provide new insight on important marine topics”, says Sissel Rogne, Managing Director of IMR.

In recent years, the partnership between Ifremer and IMR is illustrated for instance through 12 collaborative research projects in the fields of aquaculture, fisheries, the effects of climate change, environmental data, and data acquisition systems.

Through this strengthened cooperation, the two institutes want to contribute to an effective and appropriate response to global marine challenges and the goals of sustainable management of the oceans and the blue economy.