The cod spawns at Jan Mayen

“This is new knowledge for us,” says Marine Researcher Bjarte Bogstad.

The longlining vessel “Geir II” is conducting exploratory fisheries to gain more knowledge about the cod at Jan Mayen.

“Cod spawning at Jan Mayen has not been documented earlier,” says Bogstad. He is the Institute of Marine Research’s scientist responsible for Northeast Arctic cod and is leading the research part of the exploratory fisheries.

Large cod stocks in surrounding areas (off the coast of Iceland and in the Barents Sea) and warmer ocean climates may help to explain why cod are now spawning at Jan Mayen. Cod eggs spawned at Jan Mayen will likely drift westwards towards Greenland. 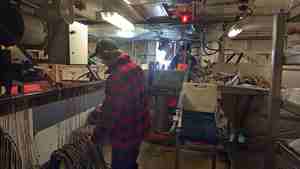 Last summer and autumn, the longlining vessel “Loran” caught about 450 tonnes of cod at Jan Mayen, which generated considerable interest in the fishing industry. Consequently, the Ministry of Trade, Industry and Fisheries decided to carry out exploratory fisheries at Jan Mayen this year and allocated a combined quota of 800 tonnes for this purpose. Eight vessels registered their interest to participate, and longlining vessels “Geir II” and “Nesbakk” were the two successful vessels in the draw. These vessels will make two trips each during 2019 to survey how the cod stocks at Jan Mayen vary throughout the year. “Geir II” is now carrying out the first of these trips.

“We have a marine biologist, Audun Hjertager, on board who will take samples that we will analyse when he returns to the Institute of Marine Research. He will bring ear stones that we can use to determine the age of the cod and which stock they come from. He will also take tissue samples that can be used to analyse the genetic material of the fish. In this way, we will get the best possible source data from which to determine where the cod at Jan Mayen come from,” says Bogstad.

Stomach samples will also be taken to chart the diet of the cod in this area, while tagging of cod is planned in the autumn.

“Virtually all the cod caught are between 70 and 100 cm long, and there was a low bycatch of other species. Most of the cod were caught on the southern side of the island. In some areas, the catch rates were on a par with those from commercial fishing in other areas. When the research cruise started in late April, many of the fish caught were spawning cod but most are now spent fish,” explains Bogstad.

The map shows the stations where the cod was caught.

From the Barents Sea and Iceland

Last year, “Loran” provided the Institute of Marine Research with samples from 86 Jan Mayen cod. Using the ear stones, the institute’s experts were able to determine that 79 of these fish were more than nine years old. Moreover, the DNA analyses showed that almost 60 per cent of these fish were Northeast Arctic cod (Barents Sea cod), more than 30 per cent were Iceland cod and seven per cent were Norwegian coastal cod.

“It is quite likely that the ocean currents carry cod larvae and juveniles from the Norwegian coast and westwards, and that these cod can grow up in the Jan Mayen area,” says Bogstad.

While there are earlier observations of cod at Jan Mayen, there are no previous reports of spawning cod in the area. Bogstad has reviewed various research reports and catch statistics to obtain background information about cod at Jan Mayen.

“The first information about cod at Jan Mayen dates from 1929 and comes from employees of the National Harbour Authority who were investigating the possibility of building a harbour at Jan Mayen. In the early 1930s, exploratory fisheries were carried out to discover the extent of the cod stocks at Jan Mayen. As the catches varied greatly, no extensive fishing was ever started in this area. Cod have later been documented in connection with exploratory shrimp fisheries at Jan Mayen, and in the 1980s there were reports of cod involvement during shrimp fishing,” concludes Bogstad.

However, only a low occurrence of cod was found in the area during a research cruise in 2011.