Physically separating salmon from salmon louse larvae reduces infestation of salmon by 75 percent compared with a normal sea cage. This has now been scientifically demonstrated using a “snorkel” cage at a commercial fish farm.

In summer, people use a mosquito net in their tent to prevent mosquito bites. Researchers at the Institute of Marine Research (IMR) have tested the same principle at a fish farm to prevent salmon being infested with salmon lice.

A “snorkel” cage is a technological innovation designed to prevent the lice reaching the salmon. The snorkel cage has a net roof at a depth of 10-20 metres to separate the salmon from the surface waters where the salmon lice larvae are present (see Figure), and a sealed “snorkel” or tube in the centre of the cage so the salmon can swim up to the surface to get air. The snorkel allows the salmon to refill their swim bladders without exposure to the infective salmon louse larvae.

Previously, smaller experiments had shown that this could be an effective way to reduce the number of lice on salmon on a large scale. This has now been confirmed by a major commercial-scale trial lasting a whole year.

“The unique thing about this project is that we have scientifically demonstrated that the principle of physically separating the salmon louse larvae from the salmon works at a commercial scale”, says project manager Frode Oppedal, a researcher at the IMR.

In the trials, the results of which have now been published in a respected journal by research scholar Lena Geitung supported by Oppedal and others, three snorkel cages were compared with three normal cages. The results were striking:

Treatment against lice is implemented when there are more than 0.5 adult female lice per salmon in a cage, which is the government requirement (0.2 in weeks 16-21).

Previous trials involving snorkel cages were conducted at smaller test facilities or in a small number of commercial cages over shorter periods. As a result, louse infestation numbers were potentially affected by size and seasonal variations, so it wasn’t clear whether the results were valid for the whole production cycle.

Frode Oppedal is one of the researchers at IMR who has worked on developing the snorkel technology and its principles over recent years, in collaboration with others, including researchers from the University of Melbourne. Egersund Net has developed the product commercially under the name “tubenet”, and it has already been introduced at various fish farms.

For the researchers, the most important goal was to document the efficacy of the principle of physically separating the larvae from the fish.

“We have shown that this works in principle. Now other types of fish cages based on this principle can also be developed”, says Oppedal:

“If more fish farms in the same area use this principle or other methods to prevent salmon louse infestation, the impact will be much bigger. We have performed analyses to show which farms spread most lice within a given area. The biggest impact will be achieved by taking action at those key locations.” 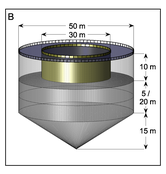