The Kudoa parasite gives the mackerel’s flesh a soft, jelly-like consistency after it is dead. Now researchers are seeing an increase in “jelly mackerel” from the North Sea.

The Kudoa parasite is found as microscopic spores in the muscle tissue that makes up fish fillets. After the fish is dead, the spores begin to produce an enzyme that gives the flesh of the fish a soft, jelly-like consistency. This condition is often called “soft flesh”.

Researchers from the Institute of Marine Research (IMR) have now looked at data from monitoring the parasite over the past 15 years.

“We can observe a clear increase. For the last 10–15 years, the prevalence of ‘soft flesh’ has been stable at around one percent in mackerel from the North Sea”, says Lucilla Giulietti, a PhD student at the IMR.

In 2019 and 2020, the researchers found that the incidence of “soft flesh” was between three and six times as high as before.

The Kudoa parasite is not harmful to humans, but it can be a problem for the fishing industry, as it destroys the fish.

The scientists also observed that it was more often large mackerels, weighing over 400 grams, which were affected by the Kudoa parasite. These are the mackerels for which there is highest demand and that fetch the highest price.

However, Giulietti stresses that it is too early to say whether it represents a genuine increase or just a temporary flare-up.

“It may be a case of natural variation, so we will have to monitor future developments closely”, says Giulietti.

“Another important finding was that seemingly only fish with large quantities of the Kudoa parasite in their flesh developed ‘soft flesh’.”

PCR-testing can be used on fish

The researchers also developed a new way of testing the fish for the Kudoa parasite. Whereas previously they just visually examined the fish on board research vessels, they can now PCR-test the fish in a laboratory.

By taking tissue samples around the fish’s dorsal fin and analysing them, the researchers can detect fish with the Kudoa parasite even without it being visible. This gives the researchers a better idea of the Kudoa prevalence in the mackerel stock that is fished than they would get by just counting the fish that actually develop “soft flesh”.

“It’s a bit like testing for Covid-19. PCR-testing allows you to detect more cases, including the ones that are asymptomatic”, says Giulietti.

Mackerel have expanded their distribution area

A higher proportion of the mackerel in the North Sea come from more southern waters, probably due to climate change and rising water temperatures in the north. Further south, there are also more parasites.

Together with other researchers at the IMR, Giulietti has embarked on a new project that aims to uncover the reasons for the changes observed. 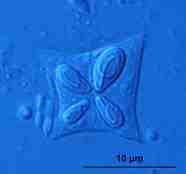