The Atlantic bonito is a mackerel-like fish in the Scombrid family. It can reach 5 years in age, 90 cm in length and weigh 11 kg. The bonito is characterized with their dark blue with black lines extending from its dorsal fin down and forward to its abdomen.

Small tuna species such as Atlantic bonito (Sarda sarda) are widely distributed in the tropical and subtropical waters of the Atlantic Ocean and several are also distributed in the Mediterranean Sea and the Black Sea. Some species extend their range even into colder waters, like the North and South Atlantic Ocean. They often form large schools with other small sized tunas or related species in coastal and high seas waters.

The results from preliminary studies conducted on Atlantic bonito in the northwestern coasts of Africa showed that this species reaches its first sexual maturity between 38 and 49 cm FL and the spawning period extends from May to July.

The growth rate currently estimated for Atlantic bonito is very rapid for the first two or three years, and then slows as they reach size-at-first maturity. Information on the migration patterns of small tuna species is very limited, due to low tagging levels of these species.

Despite the scarce monitoring of various fishing activities in some areas, all the small tuna fisheries have high social and economic relevance for most of the coastal countries concerned and for many local communities, particularly in the Mediterranean Sea, in the Caribbean region and in West Africa.

Its dorsal area is dark blue with black lines extending from its dorsal fin down and forward to its abdomen. Its lateral sides are silvery with shades of green and light blue. This species is widespread throughout the North Atlantic, the Mediterranean, and the Black Sea. Atlantic bonito spawn in the spring during May–June.

Subsequently, they embark upon feeding migrations in the Mediterranean and Atlantic. Mackerel, sand eels, sardines, anchovies, other schooling fish species, and squid are important prey species. They occur at depths extending to 200 m, temperature ranging from 12–27 °C, at salinities between 14 and 39 ppt. They reach sexually maturity at approximately 2 years of age.

The International Commission for the Conservation of Atlantic Tunas (ICCAT) Standing Committee on Research and Statistics (SCRS) currently has no management advice for small species of tuna such as Atlantic bonito (Sarda sarda). However, several regional and national regulatory frameworks exist. Knowledge about the biology and fisheries for small tuna species is fragmented in several areas and differs in quality depending on the species. Five of the ten species of small tuna comprise roughly 88% of total catch, and Atlantic bonito is one of these five species. Total estimated landings of Atlantic bonito may be highly variable between years. Estimated landings were 15,000 tonnes in 2007 and 55,000 t in 2016. Most of the catches of Atlantic bonito are taken in the Mediterranean Sea, whereas a smaller fraction is taken in the Atlantic Ocean. 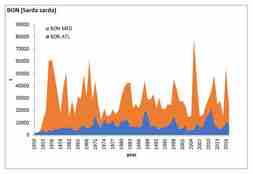 Estimated landings (t) of Atlantic bonito in the Atlantic and Mediterranean, 1950–2017.
The data for the last years is incomplete (ICCAT SCRS 2018).

Atlantic bonito are mainly exploited by coastal fisheries that are often of traditional. The species is particularly important in the Mediterranean and the Black Sea, where several methods are used to harvest this species, including: tuna fish traps; nets; purse seines; hooks; and hand lines. This species is also a popular sport fish. It has been caught primarily as by-catch in the mackerel fishery conducted in Norwegian waters during 2010 and 2011. In the last few years the Atlantic bonito has been taken on gillnet and as sport fish (rod and reel) along the southern part of Norway.

The average size of individuals captured was approximately 1.5 kg. Atlantic bonito is a tasty and desirable food fish and is marked both fresh and in cans. It has substantial economic importance throughout its range of distribution in the Mediterranean and Black Sea.

Scientific name: Sarda Sarda (Bloch 1793)
Spawning area: Atlantic, Mediterranean and Black Sea from May to July.
Growing area: Mediterranean
Maximum size: 90 cm and 11 kg
Lifespan: 5 years
Diet: Zooplankton at first, then the most schooling fish such as mackerel, sand eels, sardines and anchovies, as well as squid in adulthood.