Northern shrimp (Pandalus borealis) constitutes the most important shellfish resource in the North-Atlantic, with total annual landings of 250,000–400,000 tonnes. The species is found in deep water, mostly deeper than 70 m. It is a cold-water species inhabiting the continental shelves on both sides of the North-Atlantic.

Northern shrimp is found in the North Sea and Skagerrak, along the Norwegian coast, and in the whole Barents Sea, as well as around Jan Mayen, Iceland, along Greenland and the Canadian coast south to Flemish Cap, and in Gulf of Maine.

There is large genetic variation between shrimp stocks in the North-Atlantic, with eight distinct stocks: Skagerrak/Norwegian Deep and the Norwegian coast, the Barents Sea including Spitsbergen, Jan Mayen, Iceland, West-Greenland, the Canadian east coast, Flemish Cap and Gulf of Maine.

Northern shrimp lives at temperatures between 0 and 9 ⁰C, mainly on soft bottom where it feeds on small crustaceans, worms and detritivores. At night, shrimp ascend towards the surface where they graze on plankton. The species is an important prey for demersal fish, in particular cod.

Northern shrimp spawns and mates in autumn, in the Barents Sea from June to October, and in October–November in Skagerrak and the North Sea. The females carry the eggs under the abdomen the whole winter. In the Barents Sea, the eggs hatch in May–June, while they hatch in March–April in Skagerrak and along the Norwegian coast due to warmer water. The pelagic larvae drift with ocean currents in up to three months before they settle on the bottom.

The species is a protandric hermaphrodite, which means that it first spawns as male before it changes sex and spawns as female. Age at sex change is temperature dependent and increases with latitude.

Shrimps grow by moulting the old exo-skeleton. After moulting the body starts taking up water and increases in size before the new, soft shell hardens. The shell is then gradually filled by tissue. Since the shrimp moult at regular intervals, there are no hard structures that can be used for age-determination. Through length distributions and growth models maximum age is estimated to be 5–6 years in the North Sea and Skagerrak, and 10 years in the Barents Sea.

In Norwegian waters, northern shrimp is managed as two stocks, one in Skagerrak and the Norwegian Deep, and one north of 62 ⁰N. These management units do not correspond with the genetic populations. An annual quota for the southern stock is fixed as part of the annual fisheries negotiations between Norway and EU, giving Norway 59 % of the total quota. A joint EU–Norway management plan was implemented in 2019.

Minimum mesh size is 35 mm. A fish sorting device is obligatory in all shrimp trawls, but south of 62 ⁰N a fish retention device of 120 mm mesh size is allowed. To prevent too high catches of juvenile fish and shrimp, the Norwegian Directorate of Fisheries closes areas where shrimp catches contain illegal amounts of juveniles.

The shrimp stock in the Barents Sea is in good shape and is fished sustainably. The size of the stock has fluctuated greatly since the start of the fishery in 1970, but has always been within safe limits. Lately, the stock distribution has shifted east.

By «coastal and fjord shrimp» we mean the shrimp resource being fished by the coastal fleet operating within the 12 nm limit. Since 2017, shrimp in fjords and coastal areas in northern Norway are monitored through the annual Coastal Survey, however, for large parts of the Norwegian coast shrimp stock status is unknown. There is presently no stock assessment carried out for coastal shrimp.

Recruitment to the shrimp stock in Skagerrak and the Norwegian Deep has been low since 2008, except from one good year class in 2013. This has led to a lower stock size, and the spawning stock biomass has been below precautionary levels since 2012. The main distribution of the stock has shifted to Skagerrak, with hardly any shrimp left in the northern parts of the Norwegian Deep.

The shrimp fishery has a long history in Norway, dating back to the late 1890s. In the beginning the fishery was carried out using sailboats, but soon motorized vessels were adopted. Before World War I annual landings were around 400–500 tonnes, but increased to 3000 tonnes in 1935.

In the Barents Sea, annual catches have fluctuated between 20,000 and 130,000 tonnes since the late 1970s. Norway and Russia fish on this stock, together with third party countries (mainly from EU). The fishery is mainly carried out by large trawlers.

Shrimp is fished along large parts of the Norwegian coast. Landings have been as high as 30,000 tonnes, but since the 1990s annual landings have decreased to around 5,000 tonnes. The coastal fishery and shrimp industry have gone through large changes and many of the smaller coastal vessels have been replaced by large offshore trawlers.

In Skagerrak and the Norwegian Deep, total annual landings have fluctuated between 7,000 and 16,000 tonnes since the 1980s. Due to a lower stock size, landings have been low in recent years. Fishing is carried out with both smaller, coastal vessels and large off-shore trawlers. The large shrimp are boiled on board. The catch is landed fresh.

Latin name: Pandalus borealis
Family: Pandalidae
Maximum size: 16 cm and 20 g
​​​​​​​Longevity: 4–6 years in the Norwegian Deep, Skagerrak and along the coast, 10 years in the Barents Sea
Spawning and feeding area: Continental shelves in the North-Atlantic
Time of spawning: June–October in the Barents Sea, October–November in Skagerrak and the Norwegian Deep (eggs hatch in May–June in the north, and in March–April in the south)
Food: Organic material, detritus, small crustaceans and worms
Characteristic: Northern shrimp starts life as male and changes sex to female after having spawned as male once or twice 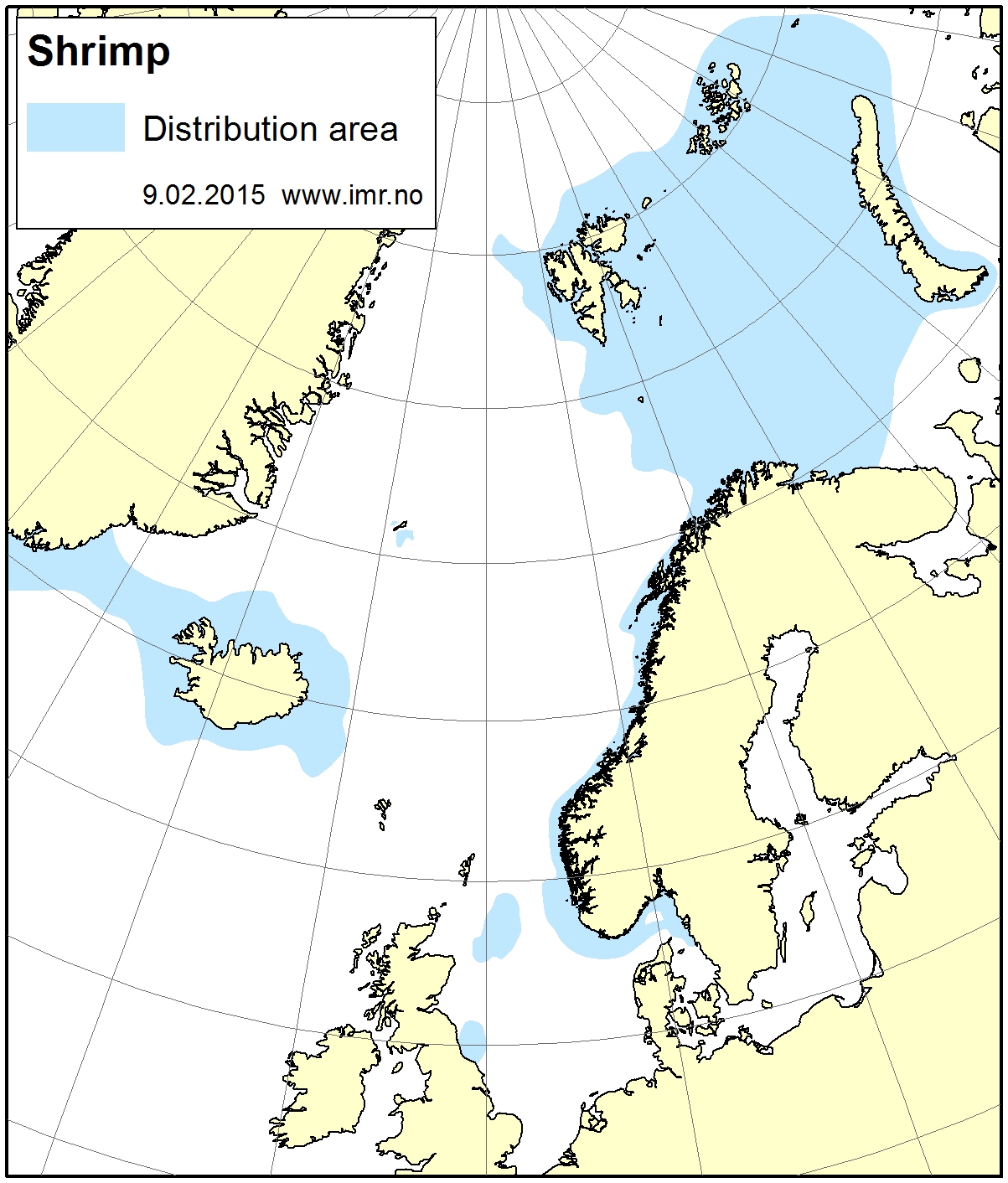