The grey seals occur on the east and west coasts of the North Atlantic, in Europa from Biscaya to the Kola coast in Russia, including the Baltic. In Norway from Rogaland to Finnmark, they occur in colonies on the outermost islands.

The grey seal is easy to identify, particular the male with a head looking like a horse. At birth the pups have a white (greyish), long-haired coat called lanugo. The birth weight is approximately 15 kg. During a two-week sucling period they increase their body mass to 40–60 kg.

The grey seals occur in colonies of various densities on the most offshore islands along the Norwegian coast from Rogaland to Finnmark. In the area from Froan in Sør-Trøndelag to Lofoten in Nordland, the breeding season is in mid Sepember to late October, while the pupping period in Rogaland, Troms and Finnmark is from mid November to mid December.

The grey seal is a main host for parasitic worms occurring in fish species, and can interact significantly with fisheries and fish farms.

Grey seal and harbour seal are coastal seals and they live in colonies along the Norwegian coast. Both species are exploited in a quota hunt.

Management is based on nationwide countings of populations every five years. In the White paper No. 27 (2008–2009) “Norsk sjøpattedyrpolitikk“ (Norwegian marine mammal policy), the management objective for coastal seals is to maintain a stable population of approximately 7000 harbour seals (counted during the moult) and a stable annual production of approximately 1200 grey seal pups. In the new management plans for both species, strategies for catch regulations are given according to whether populations are larger or smaller than the political target levels.

The grey seal annual pup production is estimated by counting and tagging pups during the pupping season in all breeding colonies along the Norwegian coast. Aerial photo surveys are also used in some areas. Total population estimates were derived from the recorded number of pups born using a range of multipliers (4.0–4.7) for conversion of annual pup production to the population of one year old and older animals. The conversion factors were derived from grey seal populations in the United Kingdom. Results from a recently completed modeling study suggest that a conversion factor 4.7 is appropriate for the Norwegian grey seal population. The population model includes reproductive data, natural mortality, catch and by-catch. The model will (when published) be used to calculate the catch potential of the grey seal population, which will form the basis for advice on quotas. Until now, the Institute of Marine Research has recommended hunting quotas of 5% of the estimated population size for both species, which is assumed to be sustainable also when taking into account a significant mortality due to by-catch of coastal seals in the fisheries. In some areas with conflicts between seals and fisheries, it has been recommended to increase quotas by up to 30%. Negative effects of coastal seals on Norwegian fisheries have, however, not been scientifically investigated and documented.

In 1973, coastal seals were totally protected from the Swedish border to Sogn og Fjordane county, and they were protected in the period 1 of May to 30 of November from Møre og Romsdal county to Finnmark county. This protection was a result of excessive exploitation and risk of extinction in some areas. Some local protective measures of both species were also introduced earlier in nature reserves. In 1996, “Forskrift for forvaltning av sel på norskekysten” (Regulation on the management of seals on the Norwegian coast) was introduced. It should ensure vigorous seal populations along the coast. Seals should be exploited as a renewable resource, and populations should be regulated based on ecological and social considerations. In 1997, catch quotas were introduced for coastal seals.

In the period 1997–2002, recommended quotas were in accordance with set quotas, but in 2003 the Department of Fisheries increased quotas significantly. In addition, bounties were introduced along the entire coast for grey seals and for harbor seals in Troms and Finnmark counties, later also south to Møre og Romsdal county. This increased the hunt for both species, but the reported catches are still generally within the levels of the quotas recommended by the Institute of Marine Research. The catches of harbour seals during the period 2006–2009 were however clearly above recommended sustainable levels.

Seals can easily get stuck and drown in fishing gear, especially in bottom gill nets for cod fish and monkfish. From 2006, the Institute of Marine Research has recorded the number of grey and harbour seals drowned in gill nets, based on data from a coastal reference fleet. Preliminary analyses suggest an annual by-catch of 300–500 harbour seals and 100–200 grey seals in gill nets along the coast.

Latin name: Halichoerus grypus
Family: Phocidae
Body size: Males: > 2,3 m and > 300 kg. Females: < 1,9 m and 190 kg
Age at maturety: 5–7 years
Breeding and pupping season: September–December
Moult: February–April
Max age: 35–40 years
Distribution: Both sides of the North-Atlantic, in Europe from Biscaya to the Kola coast in Russia, including the Baltic. In Norway, from Rogaland to Finnmark, they occur in colonies on the outermost islands.
Prey: Fishes such as wolf fish, cod, saithe and haddock.
Other: Main host for parasitic worms occurring in fish species. Can interact significantly with fisheries and fish farms.
Numbers: 5100–6000 (1+), political target level a population size equal to an annual production of approx. 1200 pups.
Total pup production: 1200–1300
Quota advice: 5 % of estimated minimum population, could be increased by 30% in areas where conflicts between seals and fisheries are high. 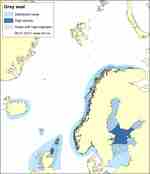