Sprat in the North Sea, Skagerrak–Kattegat

Sprat (Sprattus sprattus) is a small Clupeid species found in the Black Sea, the Mediterranean Sea and along the coast from Portugal to the Helgeland coast in Norway and in the Baltic Sea. The species seems to tolerate large variations in temperature, salinity and oxygen conditions.

Sprat is a pelagic schooling fish. It feeds on small zooplankton and is itself important for fish and seabirds. In the North Sea, eggs and larvae are found almost year-round. Sprat spawns near the surface, and the eggs flow freely in the water until they hatch after 5–6 days. When the larvae are 2–4 cm, they seek together and begin schooling. Sprat has a short life cycle, and the spawning stock is dominated by 1–2 year-old fish. With good growth, this year's fry can get into the catches as early as the fourth quarter.

Subspecies are found in the Baltic Sea and in the Black Sea. Elsewhere the stock identities and boundaries are not fully known. Within Norwegian fisheries management, one operates with two components: oceanic sprat (North Sea–Skagerrak/Kattegat) and coastal sprat. Until 2018, the International Council for the Exploration of the Sea, ICES (www.ices.dk) gave separate advice for sprat in the North Sea and sprat in Skagerrak/Kattegat. In a benchmark in November 2018, it was agreed that sprat in these two areas appear to belong to the same stock (among other things, based on genetics), and from 2019 a common advice is given. However, sprat along the Norwegian coast is different from this stock.

The oceanic sprat population spawns mainly in southern parts of the North Sea and the Kattegat, has a long spawning period, and each female spawns in portions over a period of 2–3 months. Sprat spawns pelagic near the surface. In the North Sea, it is estimated that the number of eggs in each batch varies between 100 and 400 eggs per gram of body weight and the spawning lasts from January to August. The largest amounts of eggs are distributed in the upper 25–30 m, that is, over the transition layer in summer.

After spawning, eggs and larvae are transported by ocean currents to the juvenile and feeding areas. The drift patterns from spawning areas in the North Sea and Skagerrak–Kattegat vary from year to year. There are no documented spawning migrations of sprat such as for herring.

Sprat is a typical schooling fish. It looks like a small herring, but only sprat has a belly with a strong keel of scutes that feels sharp. This is the explanation for why the Swedes call it ”skarpsill”. Sprat also has the abdominal fins in front of the dorsal fin, while herring have them right below or behind. The dorsal colour is greenish in sprat while more bluish in herring, but both are silvery. In our areas it can be up to 7–8 years old, but the proportion of sprat older than 2–3 years is very small. The largest recorded length is 19 cm, but it rarely grows larger than 14–16 cm.

Sprat grows rapidly and can be 9–10 cm already their first autumn. It becomes sexually mature at the age of 1–2 years. The largest and oldest fish spawn earlier than younger, smaller individuals.

The bulk of the sprat is found in central and southeastern parts of the North Sea, in Skagerrak and Kattegat. Norway does not have a separate share of the quota on oceanic sprat in the North Sea, but annually gets a quota of 10,000–20,000 tonnes from the EU in exchange for cod. 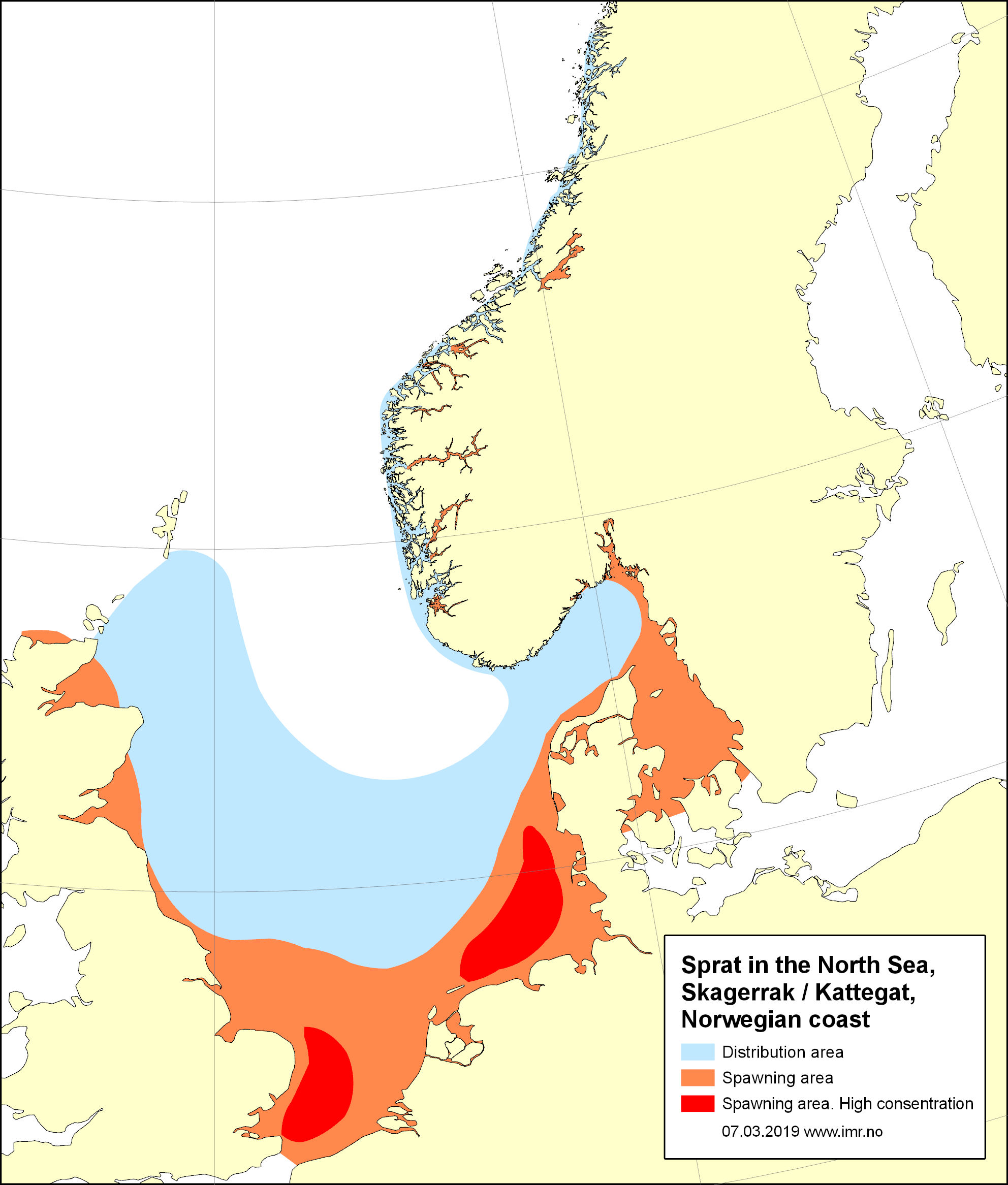