The goldsinny wrasse (Ctenolabrus rupestris) is the most numerous in many locations, followed by the corkwing wrasse (Symphodus melops), and ballan wrasse (Labrus bergylta). Cuckoo wrasse (Labrus mixtus) and rock cook wrasse (Centrolabrus exoletus) are less numerous. The sixth wrasse occurring in Norway, Scale-rayed wrasse (Acantholabrus palloni), is considered rare in Norwegian waters, but reports from divers indicate that this species is more common than previously thought. Interactions between wrasse species vary considerably along the coast. During summer, they are commonly observed in beds of seaweed; during winter they occur in deeper waters.

Species of wrasse, particularly goldsinny, corkwing, and ballan, are used to remove the lice from farmed salmon. In Norway, targeted fisheries for wrasse were initiated in 1988. The use of wrasse in Norway's salmon farming industry increased from about 1,000 fish in 1988 to around 3.5 million in 1997. Subsequent to a population decrease during 2006 of approximately 1 million individuals, the use of wrasse has significantly increased in recent years. In 2010, estimated wrasse landings doubled that of landings in 2009. In 2012 almost 14 million wrasses were used on salmon farms to pick salmon lice. Most are captured from wild populations, but wrasse many are also produced in farm operations. The use of wrasse has proven an effective method of controlling salmon lice, even at lower temperatures.

Limited natural movement and low dispersion rates for juvenile wrasse apparently leads to many distinct small local populations. It is uncertain whether these local populations are specially adapted to their local environment, but this is likely based on knowledge of other species. Small localized populations of wrasse make it difficult to estimate the size of each; as a result, it becomes difficult to determine the effects of fishing on these populations. Some local populations may be overfished, while other nearby populations may be virtually unaffected by fishing. The status of individual wrasse populations is linked to local recruitment and individual growth rates. Since several wrasse species are able to change sex, their recruitment may be determined by age and sex composition. Goldsinny wrasse have slower growth rates than the other wrasses, but have a long life expectancy.

Latin names: Labrus bergylta (ballan wrasse),
Ctenolabrus rupestris (goldsinny wrasse),
Labrus mixtus (cuckoo wrasse),
Centrolabrus exoletus (rock cook wrasse or small-mouthed wrasse),
Symphodus melops (corkwing wrasse).
Family: Labridae (spike finned fish family)
Living area: These temperature-sensitive fish are most abundant on the Skagerrak coast and along the coast of Norway, but some extend northward to the Lofoten Islands. Wrasse are linked to the coast and usually found in beds of seaweed and kelp forests, where some of this species build nests in which to lay their eggs.
​​​​​​​Diet: Benthic invertebrates. Many, including goldsinny, corkwing, and ballan wrasse are known as cleaner fish, i.e., they eat the ectoparasites off other fish thus cleaning them. They are therefore used in salmon farming to combat lice.
​​​​​​​Characteristics: Many species change sex, and sometimes external physical characteristics. Young individuals typically occur only as females which become males after they are mature, e.g., cuckoo wrasse. 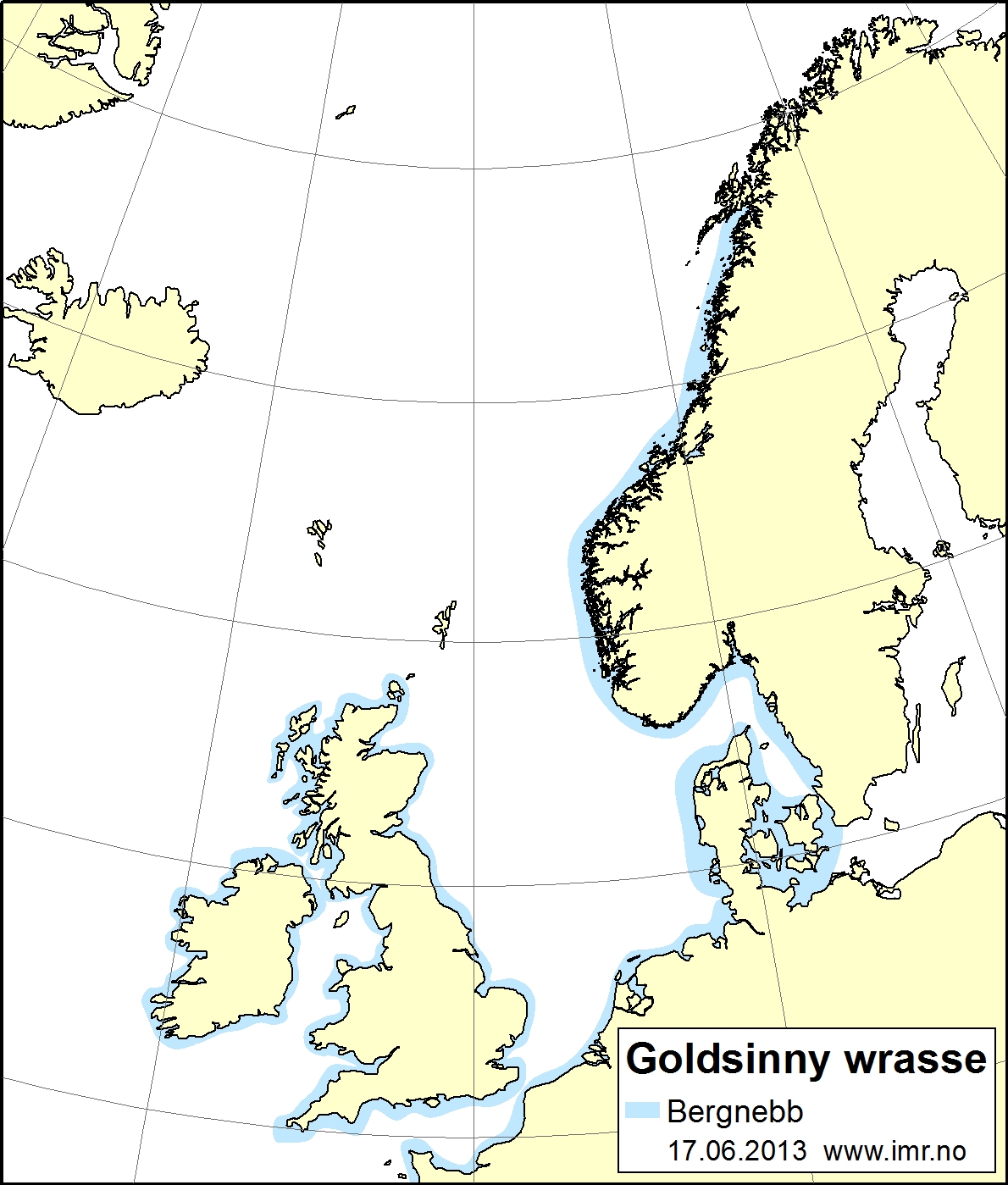