10 things you didn't know about the oceans

How much water is there in the oceans? And where is the oldest water on the planet? Marine scientist Svein Sundby has the answers.

“The plants in the oceans produce half of all the oxygen on Earth”, says Svein Sundby, a researcher at the Institute of Marine Research.

As an expert in marine and climate research, he knows an enormous amount about the oceans. Here he explains some of their secrets.

1. How much water is there in the oceans?

The oceans are vast. They cover 71 percent of the Earth’s surface, but how much water do they contain?

“That must be fairly easy to calculate”, answers Sundby immediately, before thinking it over.

Sundby puts the numbers into the calculator on his mobile phone.

“Or in a unit that is slightly easier for us to grasp: 1.4 billion billion tonnes. That takes into account the weight of the seawater.”

Seawater is heavy; much heavier than fresh water.

The weight of water depends on its temperature and salinity. The higher the salinity and the lower the temperature, the heavier it is.

“The world’s heaviest seawater – do you know where it is? It’s in the Norwegian Sea”, explains our marine scientist.

The water there weighs just over 1,028 grams per cubic centimetre.

“That’s ridiculously heavy. It was produced when salty Atlantic waters were cooled over the banks in the Barents Sea. Then it flowed down into the Bear Island Trough and on into the deep waters of the Norwegian Sea”, says Sundby.

The world’s heaviest seawater was formed back in the 1970s, and it is still sitting at the bottom of the Norwegian Sea. But it hasn’t been as cold as it was then for a long time, so no new deep water has formed there over the past 30-35 years.

“In fact, no bottom water has been formed in the Norwegian Sea in the past 30 years, due to the climate warming”, says Sundby. 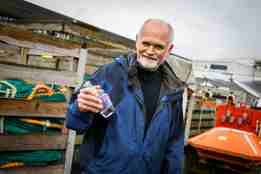 The marine scientist Svein Sundby, with a drift bottle, which is what they used to measure the ocean currents in the old days. Their modern equivalents are called Argo floats. (Photo: Erlend Astad Lorentzen / Institute of Marine Research)

3. The locomotives driving the ocean currents

In order to talk about ocean currents, you need to learn one difficult phrase: the thermohaline circulation.

“What drives the thermohaline circulation is the cooling of the relatively salty water from the Gulf Stream when it reaches the high latitudes of the Arctic. This makes the water heavier, so it sinks and flows along the bottom of the whole Atlantic Ocean”, says Sundby.

He explains that the thermohaline circulation pulls the Gulf Stream up towards Norway, while south-westerly winds push it towards us.

“One of them pulls and the other one pushes. It’s like having a locomotive at both ends of a train.”

4. We can track the movement of deep waters

The deep waters from the Arctic and North Atlantic can be tracked by scientists right down into the South Atlantic. By examining its density, salinity and temperature, they can work out the origin and age of a particular water sample.

5. The oldest water on the planet

However, the situation in the Pacific Ocean is completely different. It doesn’t have the kind of areas needed to form deep water.

“So the deep waters in the Pacific Ocean are much, much older, and hence obviously have a much lower oxygen concentration. The deep waters there can be over two thousand years old”, says Sundby.

6. The Gulf Stream will never reverse

A few years ago there was talk of the Gulf Stream changing direction due to global warming. This idea was partly fuelled by the Hollywood film “The Day After Tomorrow”, where the world enters a new ice age because the big ocean currents reverse.

“That can’t happen”, explains Sundby. The direction of the big ocean currents is only determined by the landscape of the sea bottom and the rotation of the Earth.

However, the climate does influence the strength of the currents.

“As we know, sometimes rivers flood, and sometimes they are more like a stream. That is decided by the climate, but they still always flow in the same direction”, says Sundby.

7. The most abundant fisheries are on the west coasts

“The reason why these areas are so productive is that the deep waters rise up there”, says Sundby.

All of the world’s oceans contain enormous quantities of nutrients at depths of below 200 metres. When the currents manage to bring these waters up to the surface, the production of phytoplankton explodes, in turn providing lots of food for fish. And unlike here in the north, this happens all year round in these four currents, because there is never a shortage of the light needed by plankton. 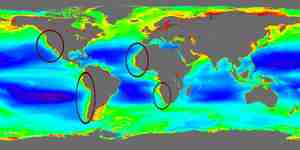 This map shows the productivity of the oceans, based on satellite measurements from 1997 to 2010. Four ocean currents – the Benguela Current, Canary Current, California Current and Humboldt Current – are incredibly productive, which means that they provide us with 20 percent of the global fish catch. (Map: NASA)

As well as containing large quantities of food, the oceans can also store enormous amounts of heat. In fact, the oceans manage to absorb 95 percent of the extra heat energy created as a result of human-induced climate change. One of the main reasons for this is that the water in the oceans can spread out the heat energy through thousands of metres of water depth.

9. The sea level is NOT rising due to ice melt

As the planet becomes warmer, the sea level rises. Most people are aware of that. But this is not being caused by ice melting. At least not yet.

“So far it has hardly had anything to do with ice melt. It is about water expanding when it gets warmer, just like the liquid in a thermometer.”

“Anyway, only the ice on land raises the sea level when it melts. The ice in the sea just floats on the water. So it makes no contribution to sea level rise whatsoever”, he adds.

However, the melting of the ice caps on Greenland and Antarctica will contribute to sea level rise.

“If all of the ice on Greenland melted, it would raise the sea level by around seven meters, so that’s an incredible amount of ice. But so far only a small fraction of it has melted”, says Sundby.

If the ice on Antarctica melted, it would raise the sea level by almost 70 metres.

“But we don’t expect all of the Antarctic ice to melt, even with future climate change. Because it’s so cold there”, says the marine scientist.

10. We’re losing insulation between the oceans and the atmosphere

Sea ice has another equally important role. It provides insulation between the “warm” water in the Arctic, which is at around zero degrees, and the air, which can be as cold as minus 20-30 degrees.

“The ice is almost like a sheet of rock wool. When you remove the rock wool, much more heat becomes available to the air in these areas. That’s why temperatures will rise more in the Arctic”, says Sundby.

If the temperature rises by one degree globally, in the northernmost parts of the planet it will increase by two degrees, he explains.