Salmon escaping from fish farms is a known problem. New research shows that wrasse can also escape and spread their genes amongst the “locals”.

Millions of wrasse caught in the wild are used to eat sea lice off salmon in sea cages. In central Norway, many of the wrasse are imported from southern Norway and the Swedish coast. Now Swedish and Norwegian marine scientists have shown that corkwing wrasse in Trøndelag have found partners imported from the south.

“Of the 40 corkwing wrasse that we took samples from at Flatanger, Trøndelag, two were first-generation hybrids. Twelve were possible second-generation hybrids. In other words, these individuals had one parent or grand-parent from the Skagerrak strait in the south”, explains marine scientist Kim Halvorsen from the Institute of Marine Research.

Corkwing wrasse are highly stationary and guard the eggs in their nests. The sandbanks of Jæren in the south-west are unsuitable for building nests and form a natural barrier to interbreeding between southern and northern corkwing wrasse.

“Since the corkwing wrasse is so stationary, there are big differences between the various populations. In the worst case scenario, hybridisation may threaten local adaptations, in the same way as with salmon”, says Halvorsen.

“So far we have proven that it takes place, and now we will look in more detail at the extent and possible consequences.

Escaped fish are the only possible explanation

“You have demonstrated that there is contact between northern and southern corkwing wrasse. But how can you be sure that they have escaped from fish farms?”

“At Flatanger we found local genes plus genes from the Skagerrak. But midway, at Austevoll, we found no southern genes. The only explanation for the southern genes at Flatanger is that they have been transported there”, explains Halvorsen.

“We already know that wrasse escape from fish farms by squeezing their way out of cages, but this is the first time that we have demonstrated an impact on local populations.

Goldsinny wrasse may also have been hybridised

“This may mean that the species has already been affected by escapes and interbreeding”, says Halvorsen.

“Could it also mean that these populations are more similar by nature?”

“The goldsinny wrasse doesn’t build nests: its eggs float with the currents. As such, Jæren does not act as a barrier, and in general goldsinny wrasse are indeed more similar genetically. The interesting thing about those findings was that the differences between populations gradually increased with distance. Until they suddenly became smaller again at Flatanger! Although interesting, the results were not clear-cut enough to draw definite conclusions.

Checking the fish for diseases

In parallel with the growing use of cleaner fish, the IMR has stepped up its research into both the goldsinny wrasse and corkwing wrasse.

“As well as further investigating the issue of hybridisation, we want to study disease levels in escaped and local fish. This will help us to understand the risk of diseases being spread by transported wrasse”, Halvorsen concludes.

Fact pages on wrasse (in Norwegian) 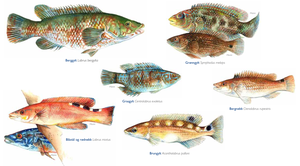