The Kronprins Haakon sails for the Antarctic

The bountiful krill in the wild and remote waters of the Antarctic has not been measured on such a large scale since 2000.

Our brand new icebreaker research vessel is about to embark on an enormously long voyage. In fact, it is almost impossible for a ship to get further away from its home port of Tromsø. Yes, it’s time for another Norwegian expedition to the Antarctic.

The researchers will study the whole ecosystem, focusing particularly on krill. Led by the Institute of Marine Research, up to seven boats, including research and fishing vessels, will obtain data on the resources found in these rich waters.

“Understanding krill is a Norwegian responsibility”

“Norway is currently the country that takes the biggest krill catch in the Southern Ocean, so we have a responsibility to provide research and monitoring data to the Commission for the Conservation of Antarctic Marine Living Resources (CCAMLR)”, explains Bjørn Krafft, who is leading the expedition.

This international survey for the CCAMLR aims to record the geographic distribution of the krill and obtain the data needed to update the population estimate for what is known as area 48. The latter area is where most of the krill fishery takes place.

The scientists will report for duty in Punta Arenas on 10 January, and the brand new Norwegian research vessel Kronprins Haakon will depart Chile with its course set for the southwestern part of the Southern Ocean. This vast area encompasses the Antarctic Peninsula, South Georgia, the South Shetland Islands and the South Orkney Islands.

During their 4,600 nautical mile-long journey taking in approximately 70 sampling stations, the researchers on the Kronprins Haakon will monitor and fish for krill. The previous large scale Antarctic expedition in the year 2000 sampled the same stations. In addition, the scientists will put satellite tags on seals and penguins on Deception Island and two other islands. This will help to understand the importance of the krill to the predators in the ecosystem and give us an idea of the areas where they feed.

This information will be used to calculate where and how much it is safe to harvest without negative long term effects for the ecosystem.

Making good use of the long journey

The transit legs between Norway and Chile will also be used for separate research cruises. As it sails across the Atlantic, the Kronprins Haakon collected data on the sea bottom, currents and phytoplankton, which provide the basis for all marine life. In addition, researchers will use echo sounding to measure the total quantity of all organisms down to a depth of 750 metres. The mesopelagic species found there are currently a little-exploited resource.

We expect the ship to return to Norway at the end of May.

The routes of the ships taking part in the mission – the Kronprins Haakon is the red line. The ships represent Norway, the Association of Responsible Krill Harvesting Companies (ARK), the United Kingdom, Ukraine, South Korea and China.

Bjørn Krafft is the cruise leader on board the “Kronprins Haakon”. It will be hard to reach him during the expedition, but he will read his e-mail at occasions.

​​​​​​​
Role in the ecosystem: Krill are a very important food source for fish, sea mammals and birds.
Size: Can reach up to 6 cm and 2 grams.
Distribution: Live in the cold waters south of the Polar front in the Southern Ocean.
Diet: phytoplankton and zooplankton
Population: The krill population was estimated at 60.3 million tonnes by an equivalent survey in 2000.
The fishery: Norway, China and South Korea are the countries that currently harvest most krill in the Southern Ocean. The total annual krill harvest is around 300,000 tonnes.

One of the people going on the expedition is Oda Linnea Iden. Having recently finished her military service as a communications soldier in the Norwegian Armed Forces, she will produce a photographic record of the Antarctic expedition for us. Her short posts on social media will give you a glimpse of life on board. 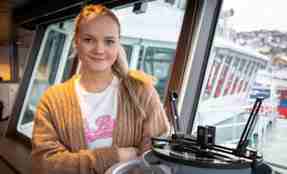