They were testing methods to survey for corals when the IMR researchers discovered the “new” deep water coral reef Bukkarevet in the Hardangerfjorden threshold.

This is the biggest documented coral reef in western Norway.

“Assuming that 20 metres of the height that we can see on the videos is coral, the reef must be at least 4,000 years old” estimates marine scientist Tina Kutti.

The newly discovered reef, which has been named “Bukkarevet”, lies on the threshold of Hardangerfjorden, by Bukkaskjeret. Stretching several hundred metres in all directions, it lies just within the Ytre Hardangerfjorden marine protected area (see fact box) proposed by the Norwegian Environment Agency.

Found a needle in a haystack

Researchers have long suspected the existence of Bukkarevet due to sporadic observations of corals in the area. Both Kutti and other people have searched the area before. But in the pitch-black environment at a depth of 150 metres, the camera can only see a few metres ahead of it. In other words, it’s like looking for a needle in a haystack.

“It was really exciting to finally confirm that the reef actually exists. And to do it using a camera that I was standing on deck holding”, says Kutti.

Want a safe distance between reefs and fish farms

The purpose of the survey was to create a “manual” for how fish farmers should survey the sea bottom before applying to install new fish farms.

Right below farms, the sea bottom is affected by faeces and feed falling from the open net cages. In general, the IMR researchers advise against locating farms too close to coral reefs.

Little is known about the coastal seabed

“The discovery shows how important it is to survey the unique natural environment on the sea floor. We have done several surveys in this area, but we had never seen this reef before”, says Kutti.

The IMR is working with the Geological Survey of Norway to systematically map the sea floor (the Mareano programme), but not much of the coastal seabed has been mapped.

Once the researchers have finished analysing their videos, they will add the discovery to the Directorate of Fisheries’ public sea chart Yggdrasil. You can find the chart here: https://yggdrasil.fiskeridir.no/ 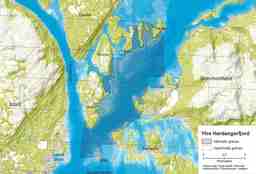