Anglerfish are typically demersal, although they are sometimes found higher up in the water column. This probably happens when it lifts from the sea bed and uses ocean currents in connection with feeding- and spawning migrations. It can be found all the way from the littoral zone to the beds of the deepest fjords. It can be found down to depths of more than 1000 meters further south in the Atlantic.

Anglerfish is distributed from the Barents Sea to the northern parts of western Africa, in the Mediterranean and the Black Sea in east to Iceland in west. ICES has advised on two different stocks of anglerfish, a southern stock including Portuguese, Spanish, French and some of the Irish waters, and one stock in the areas west of Scotland, the North Sea and Skagerrak. The anglerfish north of N 62˚ is probably more or less connected to the North Sea stock, but for the time being it is regarded as a separate stock.

As adults, anglerfish are predators with few natural enemies. They sit and wait on the sea bed luring the prey by using the first dorsal fin ray as a fishing pole. This fin ray has a filament of skin on the tip which is used as bait. All kinds of fish coming close enough to the large mouth are snatched by a rapid opening of the mouth creating suction. Even sea birds and otters have been found in anglerfish stomachs.

Recent tagging experiments have shown that anglerfish are capable of performing extensive migrations, but the dynamics of spawning- and feeding migrations are still not well understood for this species. Some of the tagged individuals have migrated from the North Sea to Faroese, Icelandic and northern Norwegian waters. Some anglerfish tagged just north of N 62˚ have been recaptured in the North Sea and in northern Norway, but the majority of the recaptures are made close to the areas of release.

Since 2001 the Norwegian fisheries have expanded northwards, and the areas north of N 64˚ are now accounting for more than 50% of the Norwegian catch. This suggests that anglerfish has a more northerly distribution along the Norwegian coast than previously seen, which could be explained as a result of higher sea temperatures since these areas represent the northern boundaries of the distribution of this species.

Latin name: Lophius piscatorius
Other names: Monkfish
Family: Lophiidae
Spawning area: The continental slopes (1000-1800 m) west of Britain, but also Norwegian fjords and deeper parts of the continental shelf
Prey: Fish, crustaceans and cephalopods
Longevity: More than 25 years
Maximum size: About 2 meters
Special features: Anglerfish spend most of their time motionless on the sea bed and use their first dorsal fin ray to lure various prey fishes. The prey is sucked into the large mouth when the anglerfish opens it 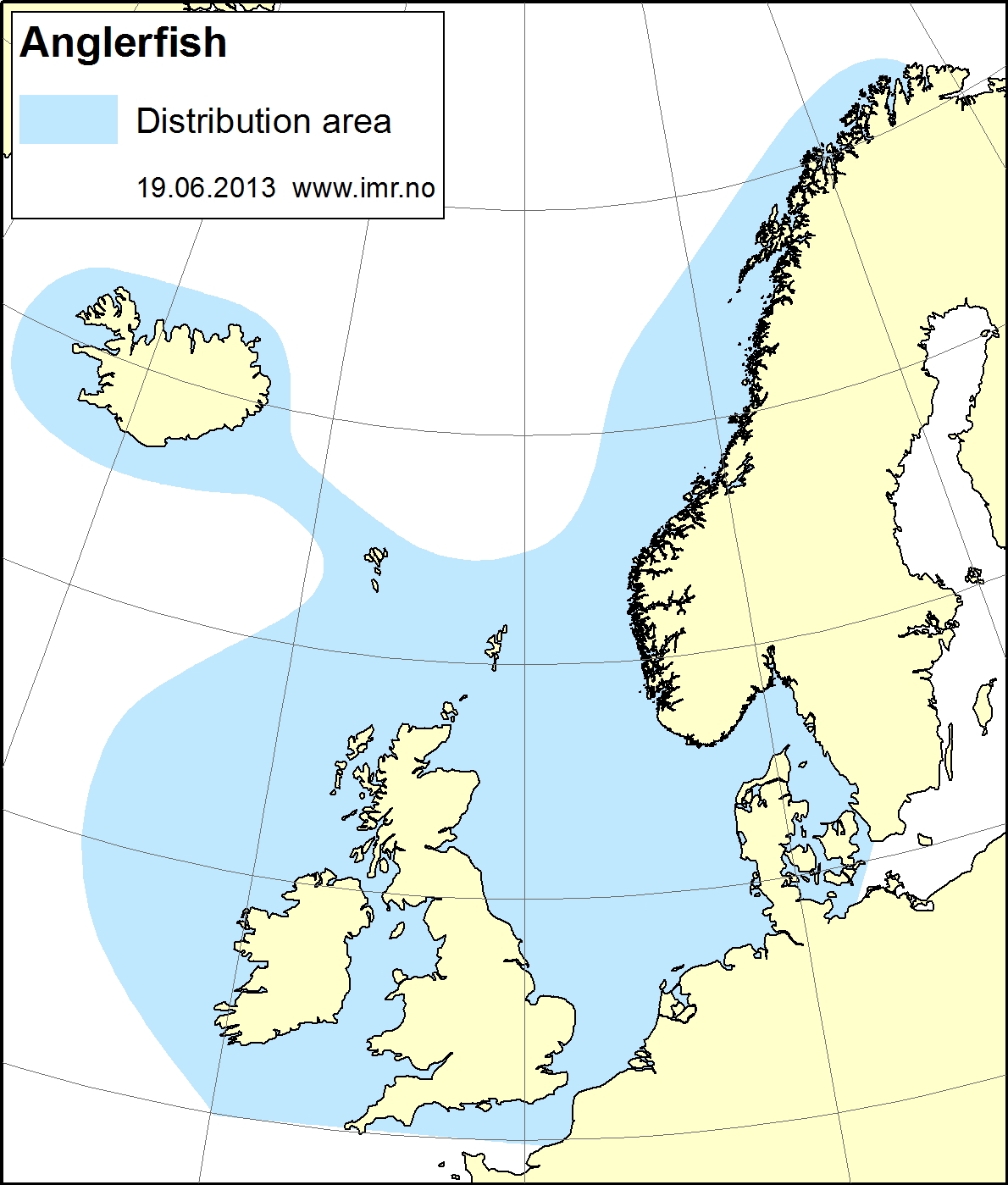