The edible crab (brown crab) is an important commercial species with a wide distribution, ranging from Northern Norway to the coast of Morocco and the Mediterranean in the south. In Norway, this marine crab can be found in high densities along the entire coast from the Skagerrak in the south until Troms in the north and sporadic occurrence all the way to the North Cape.

Being a true marine species, the edible crab is only found in waters with high and relatively stable salinity. They are common in shallow waters on hard bottoms but can be also found sandy and soft substrate. Mature female crabs are known to migrate over larger distances in a counter-current direction, to position themselves in hatching areas that enable the larvae to float back with the current to the settling grounds. Otherwise, this crab species migrates mostly vertically, feeding in the upper, warmer shore at night and moving back down into deeper water at daytime. During winter, they are often found at depths of 30–50 m to avoid the cold surface water. Occasionally, crabs have been caught down to 400 m depth.

Like all crustaceans, the edible crab must shed their shell to grow, a process called moulting. This happens in the warm season, but not necessarily every year in older crabs. Molting takes a lot of energy and leaves the crab vulnerable to predation. In older crabs, the moulting frequency can decrease to every other year, reflecting the slower growth with increasing age.

Crabs mate while the females are moulting and are soft-shelled. It takes 5–7 years and usually a carapace width of more than 120 mm to reach maturity. The male places his sperm in small packages, ”spermatophores”, into the egg channels of the female, where it can be stored for a long time. Having spent their energy reserves on the moult and shell formation, the females need to feed for 5–6 months until they have developed the eggs to the stage they can be spawned.

Spawning and fertilization take usually place in late autumn and early winter. The females have by then reached the spawning grounds, where they will stay mostly dug into the sand where they care for the eggs attached to their ”tail” and feed very little for the next 5 to 6 months, until the eggs hatch the next summer. The nearly microscopic crab larvae float in the upper layers of the water column for up to two months, moulting seven times, before they settle at a carapace width of 2.5 mm. They remain in rocky crevices and underneath sea kelp holdfasts for around one year, until they grow through a series of moults to approximately 150 mm.

Edible crabs are omnivorous and eat more or less anything they can find, but their main food source are typically shells and bristle worms. As scavengers, they also feed on carcasses and contribute to the “clean-up” of the sea floor. During summer and autumn, crabs often enter the tidal zone to feed on blue mussels and other organisms along rocky shores.

The fishery on edible crab increased continuously from the 1990ies until 2007, when the landings peaked above 8 500 tonnes. Following this record year, the annual landings stabilized at around 5000 tonnes, with some flucutations from year to year but no clear trend. In 2019, a total of 5370 tonnes were landed commercially.
Crab fishing is conducted with crab traps during most of the year. However, the main season is between July and November, although the length of the fishing season has increased over time. The fishing fleet is dominated by vessels below 11 m, mostly small-scale operations that fish for a range of species besides edible crab. In 2018, more than 400 boats registered landings of edible crab in Norway.

There are currently no catch quotas or other measures in place to restrict the crab fishery. The only regulations are a maximum number of 20 traps for recreational fisher and a minimum landing size for all landings. The minimum landing size aims to ensure that crabs reach maturity before they can be fished, and is currently set to 13 cm carapace width north of Rogaland and 11 cm from Rogaland to the Swedish border. 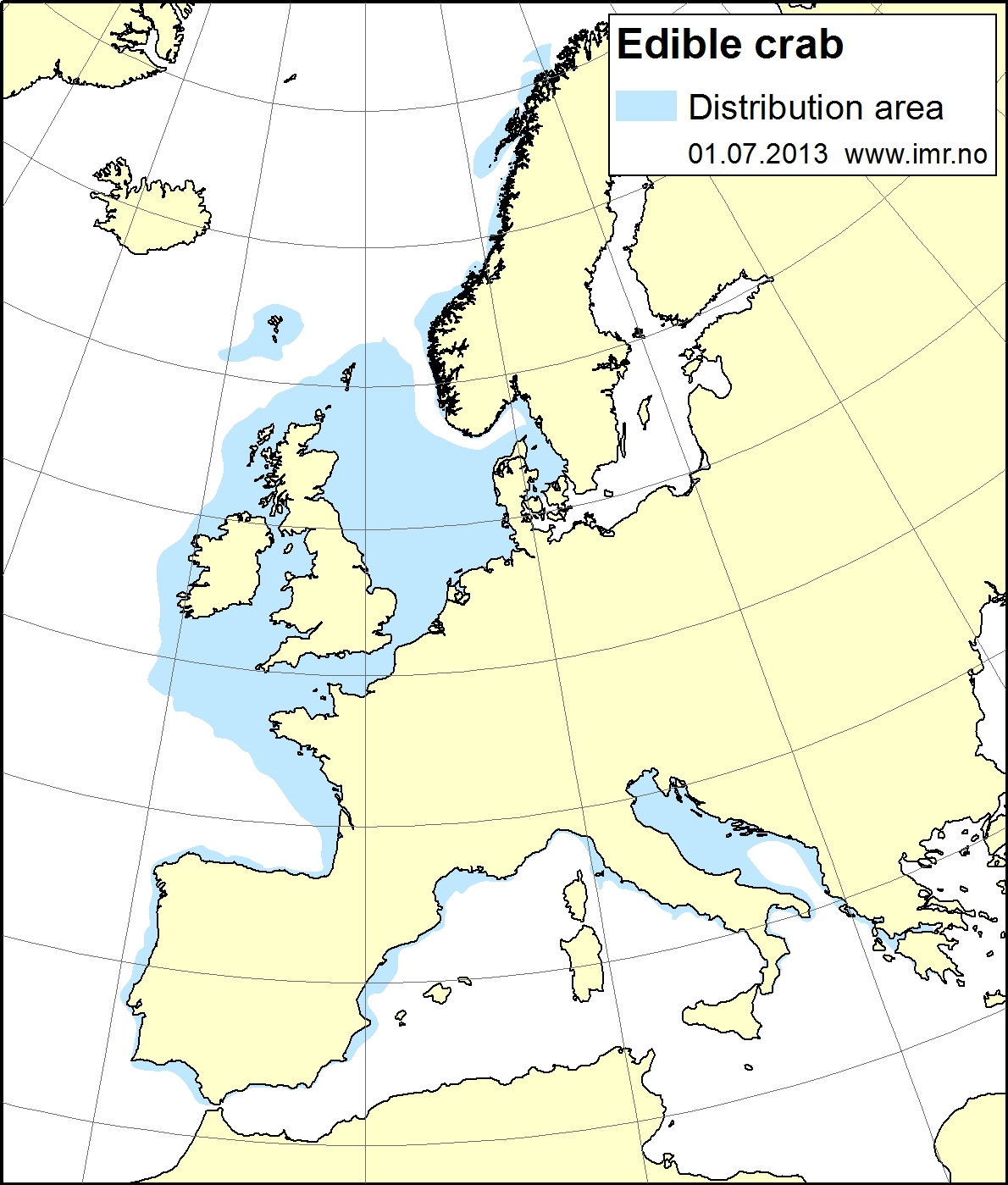