Greenland halibut is a flatfish. It resembles Atlantic halibut, but the blind side is pigmented and is only slightly brighter than the eye side. Greenland halibut has an active way of life with migrations both vertically and horizontally but occurs rarely in water warmer than about 4 oC. It is a long-life species that is vulnerable to overexploitation.

Joint Norwegian-Russian research has shown that there are genetic differences between Greenland halibut from different regions. No differences were found between individuals from Haltenbanken and northwards around Svalbard. However, difference were observed between these fish and individuals collected at the Faroe Islands, Greenland and Canada. This indicates that the population of northeast Arctic Greenland halibut is isolated and has little exchange with other populations.

Research shows that the majority of adult Northeast Arctic Greenland halibut is distributed along the edge between mainland Norway and Svalbard throughout the year. Eastwards in the Barents Sea there is very limited occurence of adult Greenland halibut. Young fish is found mainly north and east of Svalbard to White Island and Franz Josef Land.

The main spawning area is located to the upper edge of the continental shelf north and south of Bear Island. NEA Greenland halibut primarily spawn in deep water (500–800 m) during autumn and winter at the shelf edge between 70 and 75°N. Eggs and larvae drift with the currents depending on where the spawning takes place. During the last decade, most eggs and larvae have been carried north along Svalbard and east towards Franz Josef Land.

Towards the end of summer and early autumn, young Greenland halibut begin to settle in the bottom sediments. The length is then approx. 6–7 cm. This occurs after a relatively long pelagic phase (8-10 months) during which larvae are spread throughout a large area to boundaries of the population. During the first 3–4 years, the Greenland halibut remain at or near the area where they settled to the bottom, usually in relatively shallow water (100–300 m). As they mature, they expand beyond their juvenile grounds toward the edge of the continental shelf and into deeper parts of the Barents Sea.

More than 40 different prey categories are found in the stomachs of Greenland halibut, but the dominant prey species are capelin, Polar cod, squid, shrimp and waste from fishing boats. As the size of predatory Greenland halibut increases, the proportion of smaller prey groups (shrimp and capelin) decreases, and the proportion of cod, haddock and fishing boat waste increases. There is little to suggest that Greenland halibut is subject to high grazing pressure. Young fish are only found in the stomachs of three species (Greenland shark, cod and the halibut itself). However, marine mammals such as seals and whales may be important predators on halibut. 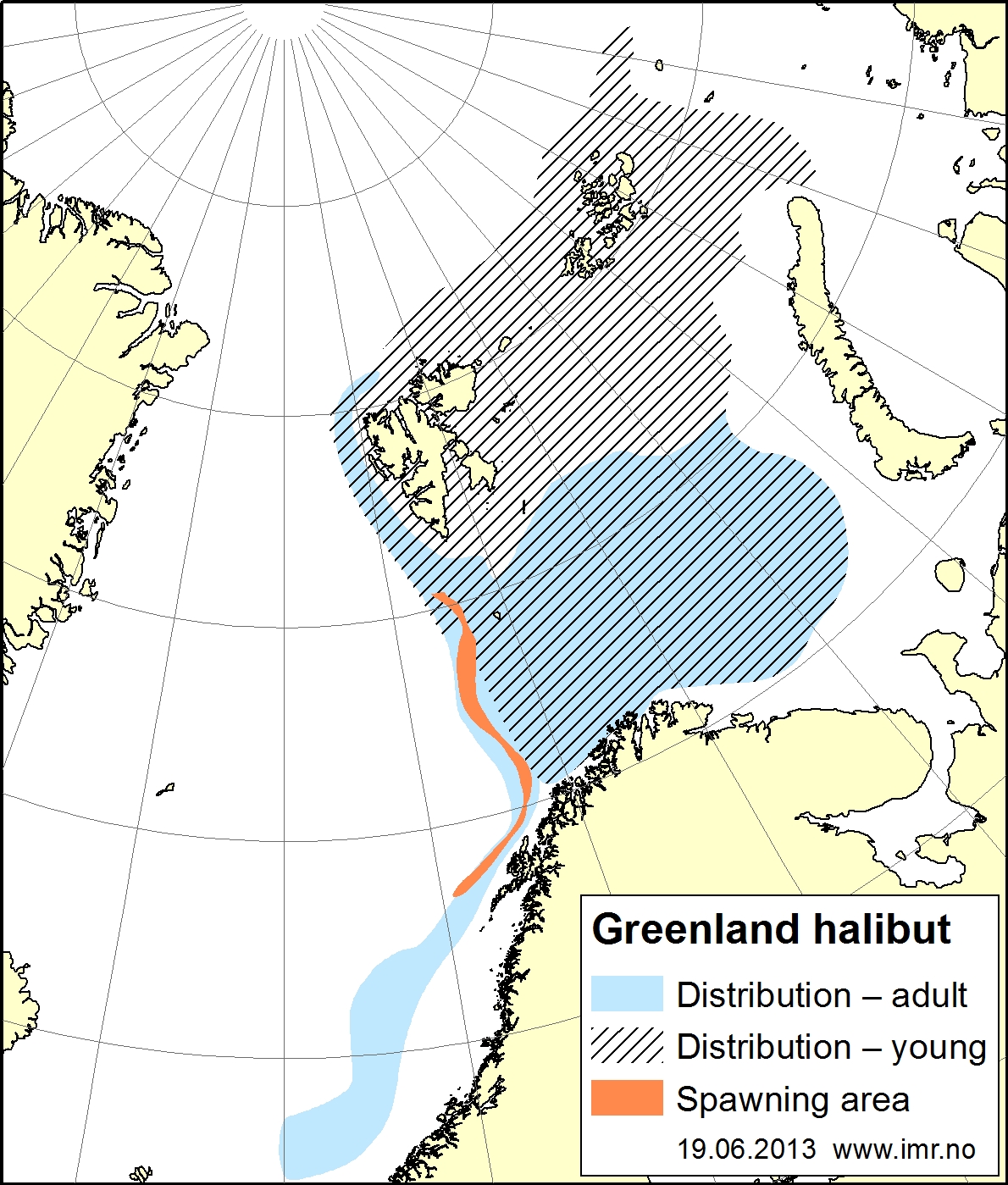 Have you caught a tagged Greenland halibut?