Harbour and grey seals are known as coastal seals in Norway. They occur in colonies distributed along the coast and they complete their entire life cycle in coastal waters.

The harbour seal, our most numerous coastal seal, is a small seal species. The males grow to about 150 cm and about 100 kilos. The females are only slightly smaller, and it is difficult to determine sex in free ranging animals. Harbour seals congregate on land in the breeding and moulting seasons, primarily on intertidal rocks and sand banks. These social animals live in groups of a few tens to some hundred individuals scattered along the entire Norwegian coast and far into the fjords. The total Norwegian mainland population numbers about 10,000 animals.

In addition, the worlds northernmost harbour seal population occurs at Prins Karls Forland on the west coast of Svalbard. This isolated population is protected and numbers almost 2,000 animals.

The harbour seal is one of the most widely distributed seal species and occurs in temperate to polar coastal waters on the Northern Hemisphere. The global population exceeds 600,000 seals, distributed among five sub-species, respectively in the western and eastern Pacific, the western and eastern Atlantic including the Baltic Sea, and in some lakes on the Canadian Ungava peninsula.

The pups are born in midsummer around 10th–20th June. They have shed their natal fur when born, and they are ready to enter the water during their first day of life. But they are dependent on milk from their mothers for two–three weeks, before they are able to catch their own food.

Harbour seals have an exciting sex life. Females enter oestrus when the pups are weaning, and then they are ready for mating. In the weeks prior to this, males are fighting for territories where to conduct their display behaviour. The largest and most dominant males establish territories on the best sites, likely the sites closest to areas where females haul out with pups. When the females enter oestrus, the males spend very much time at their display territories. They dive to a few meters and “sing” two to three times per dive. They continue this stereotypic behaviour for hours, day after day. Females choose males for mating according to the quality of their “song”. Large dominant males “sing” with the deepest voice (lowest frequency) and they have “songs” of longest duration. The smaller males have “songs” of higher frequency and shorter duration. Males mate with many females according to how many they manage to attract. And the ladies are being seduced, mostly by the gentlemen with the deepest voice and largest pondus.

All harbour seals aged one year and more, moult from mid-August to early September. They spend much time on land in large groups during the moult. They can allow higher skin temperature on land with less heat loss than they would have in water. The moult is speeded up by higher skin temperatures and reduces the time until they can go foraging.

Harbour seals must restore their energy reserves (the blubber layer) during the foraging season. In addition to the daily energy consumption for foraging, swimming, etc, the females need enough energy to invest in growth of the foetus, lactation and moult. Males need extra energy to invest in premating competition with other males, display behaviour and moult. Immature need energy for growth, moult and attainment of sexual maturity.

Harbour seals forage in near shore waters, in and above the kelp forest, in narrows with tidal currents and in deep basins where sinking organic materials support a rich animal and fish community. They seem to prefer small fishes (10–20 cm) such as Norway pout, young saithe and herring, but about 20 fish species can occur in the diet. However, the diet varies geographically and with season. A few seals may enter salmon rivers, but very little salmon and sea trout are documented in the diet of harbour seals in the ocean.

Harbour seals can be prey for other species. Some killer whales at the Norwegian coast are known to feed on seals. Also, e.g. in UK, large male grey seals have been observed to kill and eat young harbour seals. The extent of this predation from other marine mammals and the effect on the harbour seal population is not yet known.

Harbour seals are frequenting good fishing grounds to forage, and they are exposed to entanglement in gillnets. Large-mesh bottom-set gillnets for gadoids and monkfish do kill many seals every year. The Institute of Marine Research has monitored the bycatch of marine mammals since 2006 and it seems like the annual bycatch of harbour seals are in the order of 500 seals. This is of course a tragedy for the entangled seals, but it is also a nuisance and economic loss to the fishers.

Harbour seals are infested by larval stages of a parasitic nematode from the food they eat. This nematode matures in the intestinal tract of the seals. Eggs are transported into the sea water with the seal’s faeces. The eggs sink to the sea floor and hatch. Larval stages occur in small benthic crustaceans and in fish feeding on these crustaceans. In the fish, the larval parasites penetrate the intestinal wall and migrate into the muscles (fillets) of the fish where they incapsulate and wait for the fish to be eaten by a seal so the life cycle can be completed. These nematodes in the fillets have a detrimental effect of the value of commercial fish on the fresh fish markets.  This is an important conflict with the coastal fisheries.

Harbour seals are counted during the moult, when they spend much time on land close to their breeding sites. This is a common method used all over Europe. In Norway hauled-out seals are mainly photographed from small drones operated from an accompanying vessel. Seals are also visually (binoculars) counted in some areas.

Harbour seals show less site fidelity in the foraging season than in the moulting season. Many more foraging seals than the recorded number of moulting seals can therefore be seen in some areas. This may indicate good food availability in such areas.

Not all seals are hauling out simultaneously. The counts therefore give a minimum size of the population. In Skagerrak, behavioural studies of tagged seals provide information to correct for this. In Norway, the total population is about 133% of the number of hauled-out seals that can be recorded in the moulting season. That implies that 7,500 hauled out seals recorded in the moulting season correspond to a total population of about 10,000 seals. However, such corrections are associated with uncertainties, mainly due to large variations in tidal amplitude along the Norwegian coast and are therefore not used as basis for management advice. The maximum recorded number of hauled-out seals are used the assess the population trend and status. Because seals can be scared into the waters by a boat or a kayaker just prior to the count, counting is repeated on three different days in the same season. The maximum recorded number in one day is used as the minimum population size.

Harbour seals are managed according to a Management Plan adopted by Norwegian authorities. The main objective of this Management Plan is to ensure viable populations along the coast. Within these frames, the population can be sustainably harvested as a renewable resource, taking account of ecological and socioeconomic considerations. The Management Plan also states that the population should be stabilized at a level where about 7,000 hauled-out seals can be recorded in the moulting period. Harvest quotas can be used to stabilize the population at this level.

Annual counting surveys covering sub-areas along the coast, result in a total nation-wide estimate of the number of harbour seal every five years, which is the basis for recommending quotas. Surveys in the period 1996-1999 revealed a population of about 7,500 seals. In a new survey in 2003–2006, the population had declined to 6,700 seal, an annual decline of about 1.5%. The decline in population size combined with high hunting mortality resulted in listing the species as vulnerable on the Norwegian Red List in 2006. That implies that there is a 10% probability of being extirpated in Norway within hundred years. The hunting quotas were adjusted, and new surveys finished in 2015 revealed a population of 7,552 seals. The species was subsequently removed from the Red List.

The recent growth in population size is primarily due to an increase in the outer Oslofjord and at the Skagerrak coast. This increase is partly counteracted by a decline in central Norway. The population in the outer Oslofjord was severely decimated, and harbour seals on the Skagerrak coast were almost wiped out by the detrimental PDV epizootics in 1988 and 2002. The recent growth is a recovery of the stock and recolonization of former seal rookeries.

The total annual harvest quota in recent years has been about 450 harbour seals and the reported harvest slightly less, resulting in a population slightly higher that the objective of the Management Plan.

Harbour seals show strong site fidelity, in particular in the summer season, and the population is managed county by county. These administrative management units are not based on science. There is a risk that small, local, genetic genuine populations can be wiped out. The Institute of Marine Research is therefore studying the genetic population structure at the Norwegian coast with the aim of defining biological management units. Preliminary results from genetic samplings indicate local genetic populations in Trøndelag and Nordland counties. 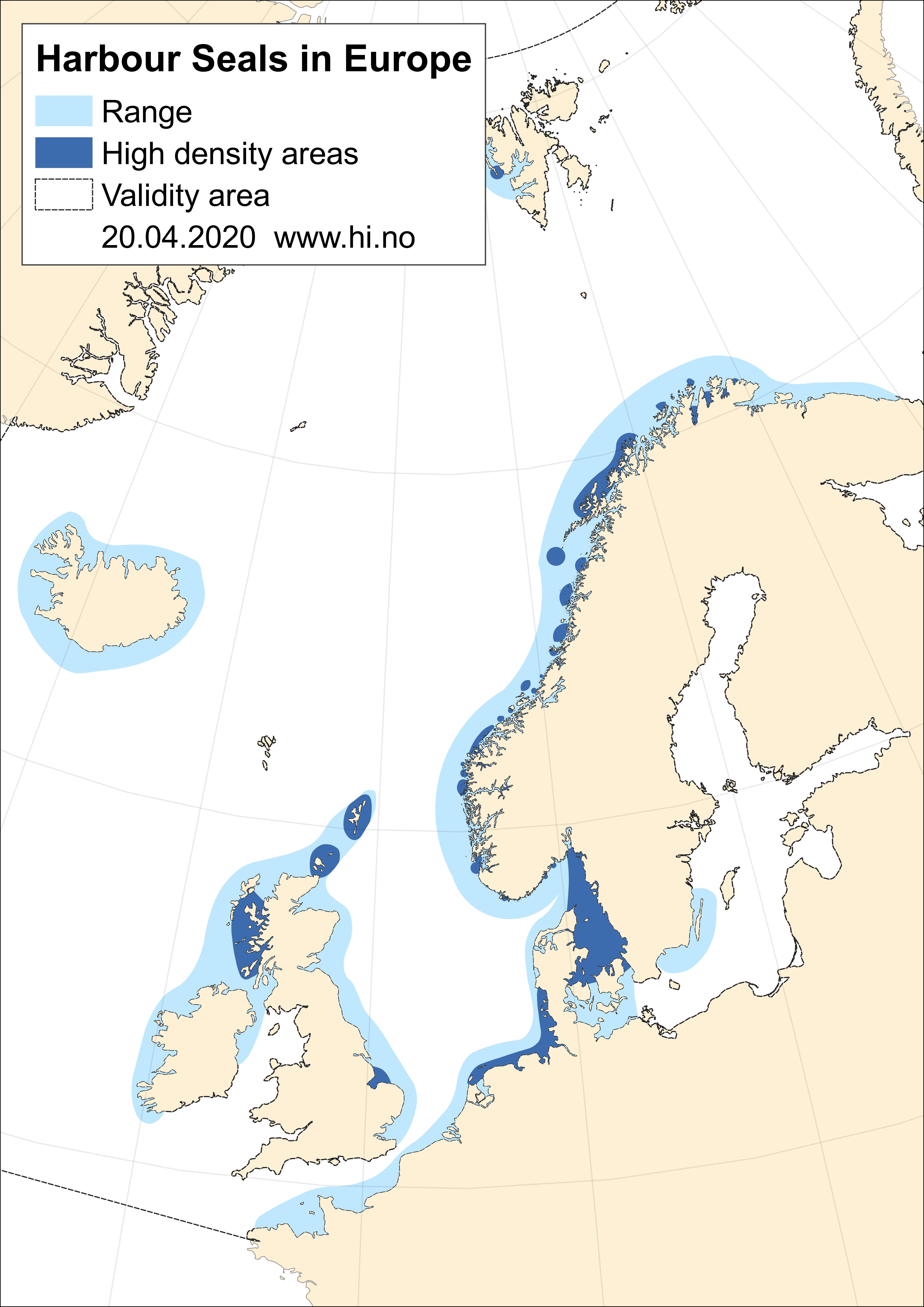 Marine mammals are mammals living in the ocean where they also find their food (some species also occur in fresh water). However, as all mammals, they are warm blooded (homeoterms), have lungs and breath air. They give born to live offspring which are dependent upon milk from their mothers until they learn to catch their own food.