The horse mackerel (Trachurus trachurus) is widely distributed from Africa to the Norwegian Sea. It is a pelagic fish feeding on zooplankton, fish larvae and smaller fish. International catches of western horse mackerel are annually around 150 000 tonnes.

The horse mackerel is widely distributed in the Northeast Atlantic from Africa to the Norwegian Sea at 66°N, including in the Mediterranean Sea, Black Sea and Skagerrak. The western horse mackerel are spawning in vast areas and over long time periods, in a similar way as Atlantic mackerel.  Western horse mackerel have a peak spawning from late spring to early summer. They normally spawn from the Bay of Biscay to west of the British Isles. After spawning, parts of the stock migrate northwards to productive waters and feeding in the northern North Sea, Norwegian Sea and along the coast of Norway. The largest fish tend to travel farthest to the north.

The stock is very dependent on occasional high recruitments. After a series of low recruitments, the estimates since 2014 are above average (1983–2019). Spawning stock biomass has been declining since 2006, whereas fishing mortality has decreased since 2013. The western horse mackerel stock is at present not in a healthy state, predominantly due to low recruitment over many years.

The two major fishing gear for western horse mackerel are pelagic trawl and purse seine. Norway has a directed purse seine fishery for horse mackerel predominantly taking place annually during autumn in the southeastern part of the Norwegian Sea and northeastern part of the North Sea. The Norwegian catches of western horse mackerel has varied a lot from about 5000 and 70 000 tons over the last 10 years, with a rapid decrease in catches during the last few years coinciding with reduced stock size and availability in northern waters. 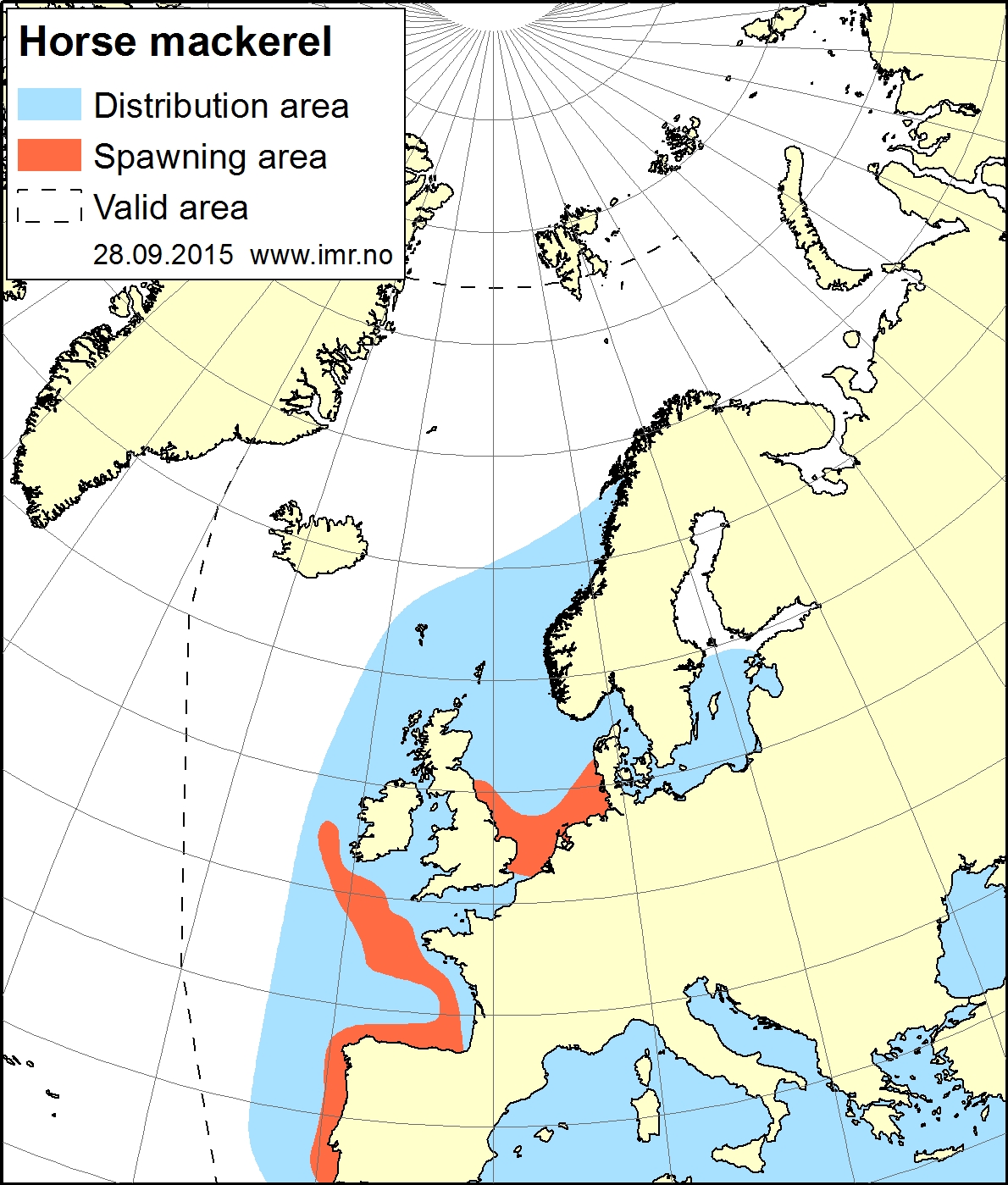 Latin name: Trachurus trachurus
Family: Carangidae
Body size: Maximum 60 cm in length and 1.6 kg in weight. Usually less than 500 g
Max age: Up to 40 years, usually not older than 25 years
Distribution: Widely distributed from Africa to the Norwegian Sea at 66°N, including in the Mediterranean Sea, Black Sea and Skagerrak
Prey (food): Zooplankton, fish larvae and smaller fish
Characteristics: Elongated and compressed body. Dark spot on the operculum. Large head with the posterior end of upper jaw reaching anterior margin of eye and the lower jaw is projected