With its extremely long pectoral fins (a third of its body length), hump on its back and wart-like growths on its upper and lower mandibles, the humpback whale is distinct from the other whales in the fin whale family. The generic name Megaptera is of Greek origin and means ”large-winged" (mega = large; ptera = wing). This obviously refers to the long pectoral fins.

Humpback whales have a dark back and light, almost white, abdomen from the lower mandible back to the anus. The long pectoral fins and underside of the tail have individual degrees of white. Humpback whales very often lift their tail before a new dive, and their colour pattern on the underside of the tail fin is used to identify individuals in behavioural studies and "mark/recapture" experiments.

Humpback whales reach 15–17 metres in length. The females are 1–1.5 metres longer than the males. The age of reaching sexual maturity varies from area to area but is often between five and ten years of age. The gestation period is 11.5 months and the calves are 4–4.5 metres long at birth. They will have grown to between 8 and 10 metres by the time they are weaned. Some calves may suckle for up to a year, but they gradually begin to move on to other food after about six months. Sexually mature females have a calf every two or three years.

Humpback whales migrate from cold waters near the edge of the ice, where they graze in the summer, to subtropical waters where they give birth and mate in the winter. The calves follow their mothers for at least a year, and this means that a connection to specific grazing areas is formed through their mothers. The known calving areas for the humpback whale are shallow waters in subtropical areas. North of the Dominican Republic in the Caribbean, there are several known shallow banks where we find humpback whales that have grazing areas along the coasts of the USA and Canada, off Western Greenland, Iceland and the Barents Sea. Although they have a common calving area, there is little interchange between the different grazing areas.

In the winter, the sexually mature males "sing". The song is long and varied. All the male whales from the same population have songs built up along the same basic theme, but with small individual variations. This basic theme can gradually change and these changes appear to be coordinated within the same population. Their song has been interpreted as a method for attracting females, but newer studies suggest that the primary function is communication between the males, perhaps to establish a hierarchy between them.

Humpback whales appear to be playful; they jump out of the water and strike the surface of the water with their long pectoral fins or their tail fin. The biological significance of this apparently playful behaviour is not known.

Latin name: Megaptera novaeangliae
Family: Balaenopteridae
Body size: Up to 15 meters and 30 tonnes
Max age: Uncertain, but it is not unlikely that some individuals can become up to 80 years old.
Distribution: Humpback whales can be found in all of the worlds oceans
Prey: Fish and krill
Characteristics: Humpback whales have large pectoral fins wich in the Atlantic usually is white – "megaptera" means "great wings". 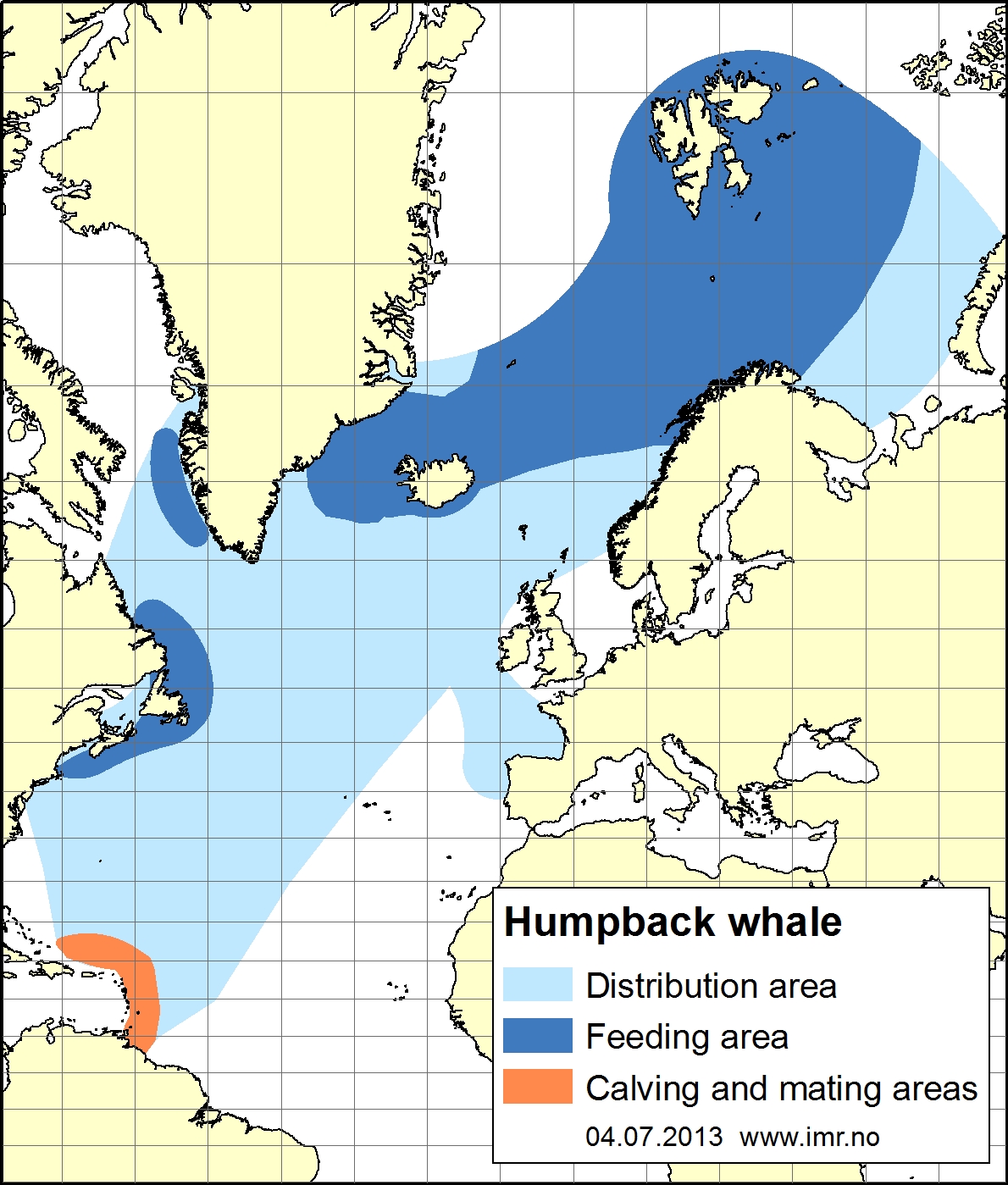 The humpback whales' tail fins have individual color patterns. If you have photos of humpback tail fins, we are pleased to have a copy with location and date for the observation. Please send to: postjournal@imr.no