Despite its commercial interest, lumpfish is a poorly studied group, and many aspects of its lifecycle and ecology are unknown. Lumpfish is a semi-pelagic species. The adults are distributed in the open ocean but migrate towards coastal areas to spawn. This happens during the spring season and the males generally arrive at the coast before the females.

After an extended courtship, eggs are fertilized by the male as they are laid by the females. On contact with water, the eggs become sticky and clump into a nest on rocky bottoms. The male lumpfish cares for the eggs by aerating and guarding them against predators. After laying their eggs, the females seem to rapidly leave the spawning ground. Females may release two egg batches and spawning occurs over a 4-month period from February to May. Each female spawn 1/7 of their body weight. Eggs from the different females have different color, so that the lump of eggs guarded by one male may be green, yellow and red.

The small lumpfish growing up in the kelp forest, hide and seek to attach themselves with a suction disk on kelp, where we can see them as small buds. When they are a year old, and slightly larger than a Golf ball, they swim out into the open sea. Here they feed on plankton in 2–4 years before they wander back to the coast to spawn.

The species is found throughout the eastern Atlantic Ocean, North Sea, Baltic Sea and Barents Sea. Lumpfish may travel great distances in the ocean, and it is uncertain whether there are several distinct populations, and how large these are. In Norway, we estimate that the main population spawns in Nordland, Troms and Finnmark, but there are lumpfish spawning along the rest of the coast.

In recent years, lumpfish has been used to rid aquaculture salmon of the parasitic copepod, the salmon louse. Only juveniles are used, and these are also raised in aquaculture but from wild broodstock. Like all new farmed species, there are some challenges, but lumpfish has a promising future as a cleanerfish. In contrast to wrasse, lumpfish are well adapted to low temperatures and can be used throughout Norway.

Stock assessment is based on the lumpfish abundance in the Barents Sea and the northern part of the Norwegian Sea, where most of the fishing takes place.

Lumpfish abundance was low up until 1997 and increased to a peak in 2006–2007. The increase appears to be a direct effect of reduced quota in 1997 but was strongly correlated with increased temperature and increased supply of Atlantic water. In recent years, lumpfish have shown a large spread north in the Barents Sea.

The calculation for 2017 shows that the biomass of the spawners is around 87 279 tons, which corresponds to 17 456 tons of roe. Under this scenario, and with the current quota of 4 tons, the catch rate remains 1%. The advice of the Institute of Marine Research is that regulatory measures must ensure that the total quantity does not exceed approx. 400 tons of raw eggs.

Data on lumpfish is recorded during the Ecosystem Survey in the Barents Sea since 1965. The collection has been standardized since 1980. Between 196 and 425 stations are trawled annually, and lumpfish are recorded during this survey. Since 2012, these data have been used in the assessment to calculate abundance and biomass of lumpfish using a stratified swept-area index calculated with the StoX program, a program developed by the Institute of Marine Research. The lumpfish biomass in the Barents Sea follows the temperature fluctuations, and both biomass and temperature have increased since the 1980s.

Latin name: Cyclopterus lumpus
Other names: Lumpsucker
​​​​​​​Norwegian names: Rognkjeks (female), rognkall (male), rognkjølse
Family: Cyclopteridae (lumpfishes)
Maximum size: Up to 63 cm and 5.5 kg
Lifespan: More than 7–8 years old, maybe 15
Habitat: Kelp forest belt along the coast during first year of life, then freely swimming in the ocean. Living from Biscay to Iceland and the northern Barents Sea
Spawning area: Along the coast of the eastern Atlantic Ocean on the shallow water in the entire distribution area
Spawning time: In the spring, giving the basis for fisheries
Food habits: Mainly plankton found in open water 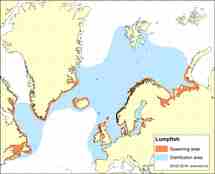