Common minke whales reach up to 10 metres in length. The females are slightly longer than the males. The common minke whales in the northern hemisphere have dark backs with a lighter, almost whitish abdomen. The pectoral fin has a clear white band. They have whitish baleen.

Until recently, all the minke whales of the world were considered one species, but genetical and morphological studies are underway to clarify the more complicated reality. The dominant form in the southern hemisphere is a little bigger than "our" minke whale and lacks the distinct white band on the front flippers. Their baleen also have a colour pattern that resembles that of the fin whale, that is to say, some of the baleen on the right-hand side are light coloured while others are dark. This form has now been classed as a distinct and separate species (Balaenoptera bonaerensis) and can be called the Antarctic minke whale. In the southern hemisphere, there is also a "dwarf form" that has a colour scheme resembling that of the northern minke whale. In addition, the minke whale in the North Atlantic has been made a separate distinct subspecies in contrast to the minke whales living in the North Pacific.

Minke whales reach sexually matuity at around six years in the case of females and seven for males. Mating takes place in the autumn and winter, and the females have a gestation period of ten months before giving birth to a calf 2.4–2.7 metres in length. The suckling period is almost six months. Minke whales have an annual reproduction cycle and, apperently, about 90 percent of sexyally mature females are pregnant each year.

Minke whales have a migration pattern similar to that of the blue whale. The diet is very varied for a baleen whale and varies from copepod (zooplankton) and krill to fish such as capelin, herring, mackrell and sometimes large codfish. Minke whales are very fast animals that can achieve great speeds over short distances, and they do not normally have a visible spout. They are extremely streamlined and visible on the surface for a short while each time they breath. The most common movement pattern is a series of 3–5 rather fast spouts before making a long dive that may last up to about 5 minutes. On average, the minke whale comes up to breath about 50 times over the course of an hour.

The minke whale is the only species of whale that it is permissible to catch in Norway. The meat is used for consumption and is popular in fish restaurants. Catches are regulated by quotas and monitored carefully. DNA tests of all minke whales caught are analysed and form part of a national DNA register. In this way, it is possible to trace all whale meat sold back to the individual whale. This is an effective way of exercising controll over legal whaling. 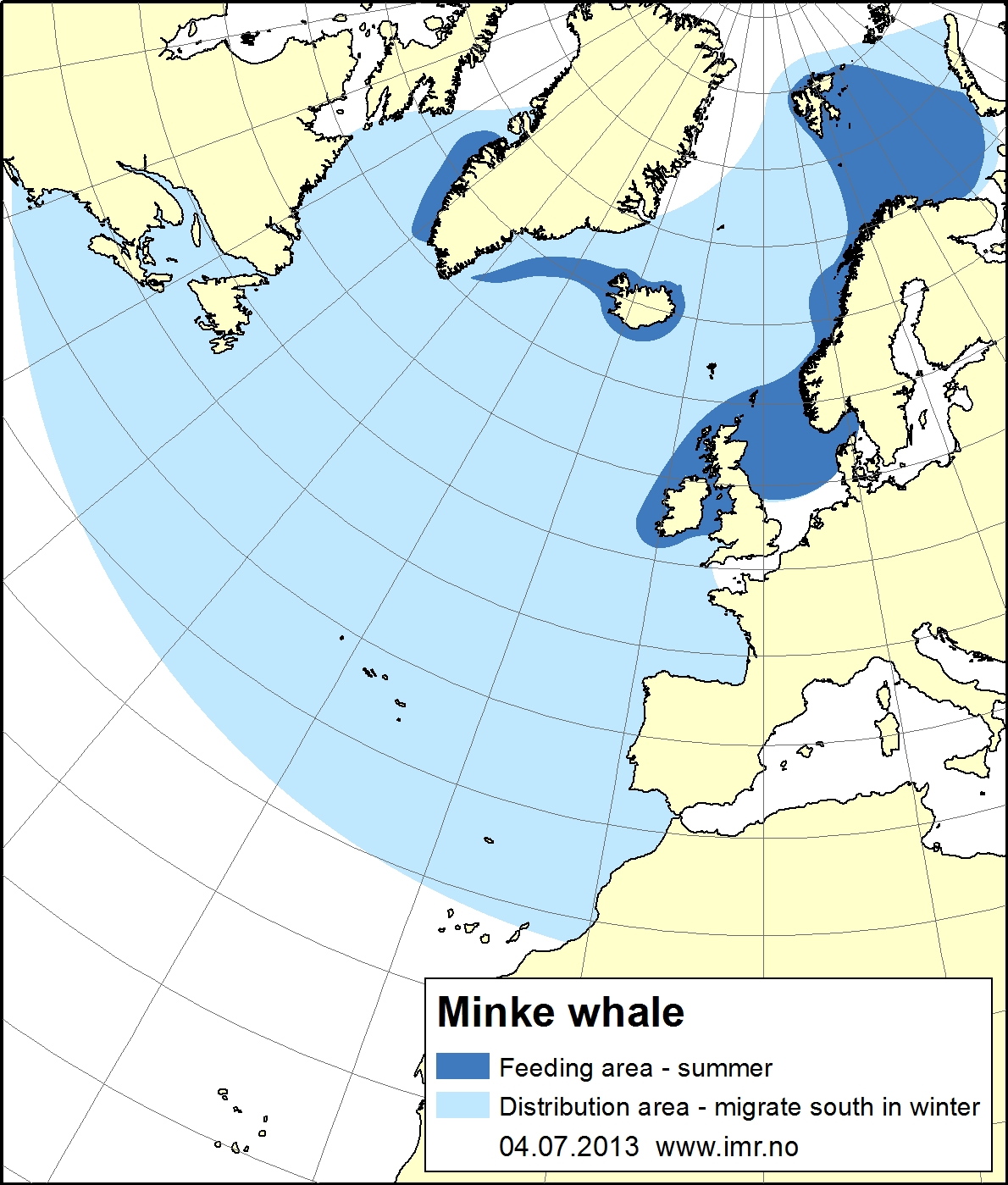 Latin name: Balaenoptera acutorostrata
Max size: 9 m long and 5–8 tonnes in Norwegian waters
Life span: At least 30 years
Distribution: Minke whales can be found in all of the worlds oceans
Birthing area: Probably in warmer waters
Prey: Plankton and fish
Characteristics: One of the most difficult whales to observe because it is unobtrusive spout up only surface a few seconds at a time