The porpoise is all small toothed whale about one and a half metres long. In Norway, the porpoise takes its name, "nise", from an Old Norse word for to sneeze. This refers to the sound of the spout when the porpoise comes to the surface to breathe. The porpoise has a dark grey back and somewhat lighter abdomen with a dark stripe from the corner of the mouth to the pectoral fin. Together with five other species, they form the Phocoenidae family.

The female is a little bigger than the male and reaches 160 cm and 60 kg while the male typically reaches 150 cm and 50 kg. At birth, the calves are about 70 cm long and weigh no more than five kg. Porpoises reach sexual maturity when they are about 140 cm in length (three to five years old). Sexually mature females give birth to a calf every year and most births are in the early summer. The suckling period is relatively long but does not last an entire year. Their maximum life expectancy appears to be about 24 years of age, but only about 5 percent of the animals live for more than 12 years.

Porpoises are probably the most abundant cetacean species in Norwegian waters. In the North Sea, there are about 350,000 individuals. They occur in considerable numbers further north along the Norwegian coast and in the Barents Sea north to the polar front. In these areas, we do not presently have reliable figures regarding the size of the population.

Porpoises are very vulnerable to getting stuck in fishing nets and drowning. Each year, a few thousand drown in Norwegian fisheries. The EU has introduced measures for reducing this mortality rate, but it is unclear how effective the measures are.

A great range of fish species are on the porpoise's menu. But it appears as though they do not dive much deeper than to 200 metres to find food. A study of the porpoise's choice of food showed that their diet varied along the Norwegian coast from North to South. Along the Finnmark coast, they ate a lot of pelagic fish, particularly capelin. Along the Sørland coast, they had eaten some herring and sprats and, in the Kattegat, a lot of bottom fish. Along the west coast, their diet was a mixture of pelagic fish and bottom fish with a great element of mesopelagic fish, such as the lantern fish. During the day, the lantern fish is probably so deep that it is inaccessible to porpoises. They have, therefore, probably been eaten at night when they migrate to the surface.

Name: Phocoena phocoena
Family: Phocoenidae
Body size: Max length of 2 meters
Max age: Maximum age is 20 years
Distribution: Can be found along coasts around the North Atlantic
Prey: Different species of fish, squid and crustaceans, in the North Sea, particularly mackerel, herring and small herring
Characteristics: Is usually spotted in small herds (2–5 individuals). Give sometimes the impression of a rolling motion when swimming. The name porpoise is from Old Norse and means "snorting" after the sound it makes when it breathes in water. 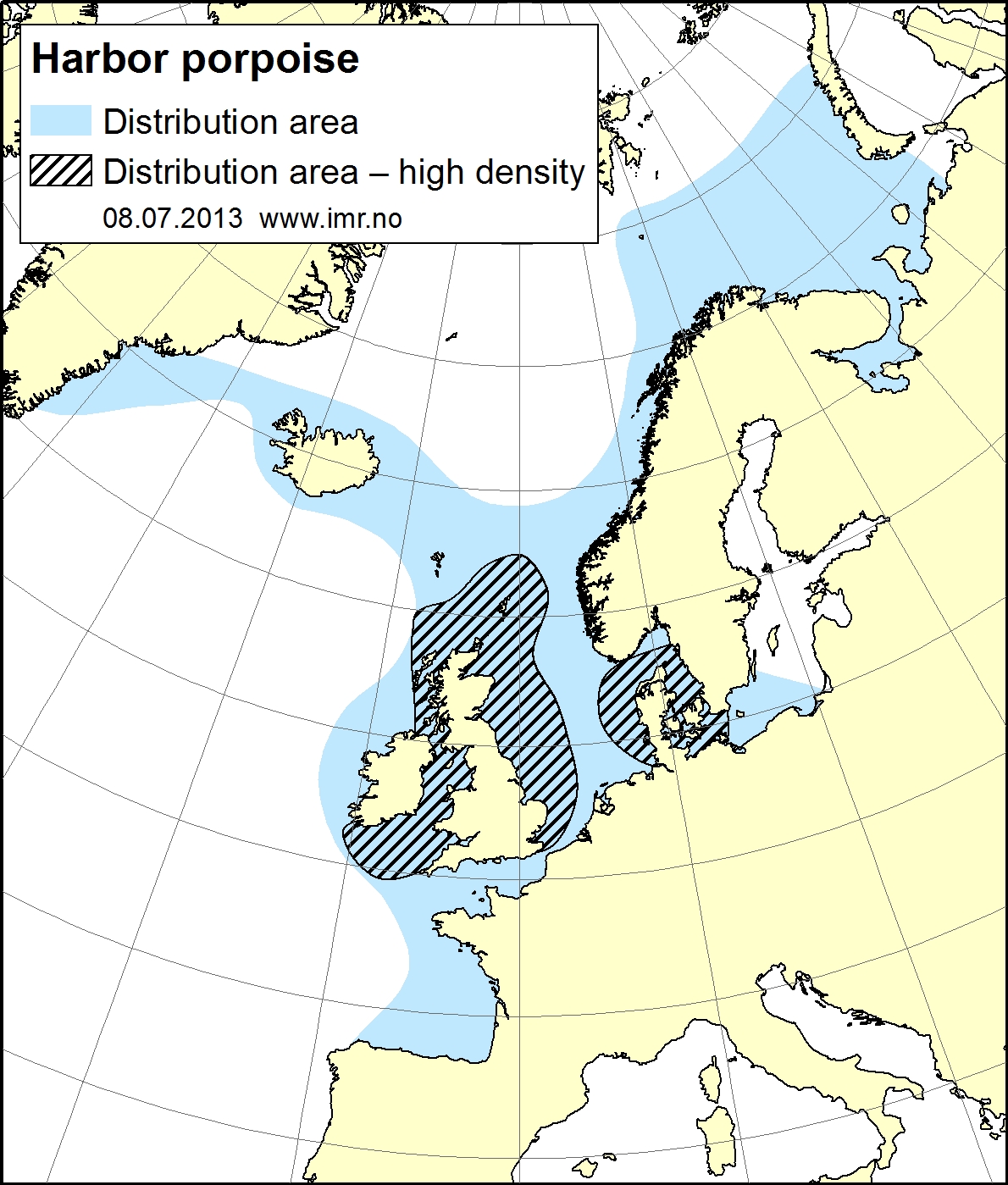