The tag attached to a blue fin tuna outside of Bergen has surfaced west of Ireland. It tells the story of quite a ride.

On 8 September, marine scientists managed to put a satellite tag on a 250 kg bluefin tuna at Øygarden west of Bergen.

During the project, the scientists managed to tag two bluefin tunas with satellite pop-up tags. This has never been done before in Norwegian waters, at the fish's northernmost habitat. The first tuna died soon afterwards, but the second tag was attached to a robust and healthy bluefin tuna after reeling it in for 45 minutes.

“The tag came off a bit earlier than intended, but that’s not unusual. We can tell that the bluefin tuna was still alive and that the tag worked itself off”, explains Keno Ferter, the marine scientist responsible for the project.

Nevertheless, the tag was in for a ride

“Over the course of the 33 days that the tag stayed attached to the ‘Formula 1’ of fish, it soared out of the water and dived down an incredible 487 metres below sea level. It has travelled through temperatures ranging from 3.5 to 17.2 degrees celsius”, says Ferter, who has now submitted his final report on the tagging project.

After leaving Øygarden, the bluefin tuna probably headed south before turning back towards the Norwegian coast. Then it crossed the North Sea and passed the north coast of Shetland, before rushing south to the west of Ireland, where the tag fell off, floated up to the surface and sent its data back home.

“We now have 33 days’ invaluable first-hand knowledge about the migration and behaviour of one of the most northerly giants of the sea.”

The world’s largest tuna is once again coming to Norway to feed in summer, after a long absence due to international overfishing. It is the very biggest individuals that come here to the northern limit of their range. (Also see: Bluefin tuna makes a big comeback)

The data from the Norwegian project will be added to a big international data set on the bluefin tuna. The Atlantic tuna commission ICCAT draws on the research to ensure sustainable management of the formerly threatened species.

“And we want to make an even bigger contribution. We have just secured funding for another tagging project next year”, says Keno Ferter.

Will build on this year’s experiences

“Done properly, rod-and-line fishing is clearly the safest method when tagging bluefin tuna. Next year’s project will therefore be similar to this year’s one.

“After facing the remnants of a tropical cyclone, combined with travel and logistics problems for the fishermen, we had fewer hours at sea than I had hoped. But it was the very first time that rod-and-line-caught bluefin tuna were satellite tagged in Norwegian waters. We will build on our experiences from this year to design a good project for next year”, says Keno Ferter. 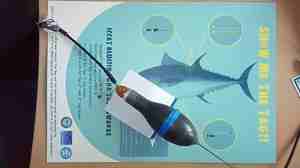 Pop-up tags work by logging data. They register light, pressure, time and temperature. Once they surface, they can send information back to the researchers by satellite. The “most probable” route shown on the map is the result of a complex calculation.