Cod is a predatory fish and mainly a demersal fish, but in the Barents Sea it is also to a large extent distributed in the pelagic water masses during some parts of the year.

Young cod (age 0–2) feed mainly on zooplankton, while fish and benthic organisms are the main food items for the older cod.

Vesterålen/Lofoten are the main spawning areas for cod. The eggs are spawned pelagically in February–April. Egg and larvae are carried with the current into the Barents Sea, and the 0-group fish settles to the bottom there in late autumn. Most of the stock is found in the Barents Sea, on the warm side of the Polar Front, reaching to 76°N and 50°E. In warm years, the cod distribution extends farther to the north and east. Inresent years, cod has been found north to 82° 30’ N (north of Franz Josef Land) and east to 79° E (northern Kara Sea).

The Northeast Arctic cod stock is the largest cod stock in the world. Other marine cod stocks are found around Iceland, around the Faroes, in the Baltic, the North Sea, the Irish Sea and in the areas around Georges Bank and Newfoundland in the Northwest Atlantic. In addition there are local fjord and coastal stocks along the coasts of Norway, South Greenland and Canada.

The main nations fishing on this stock are Norway, Russia (which takes about the same quantum as Norway), Faroe Islands, Spain, Greenland, United Kingdom, Iceland and Germany. About 70% of the annual catch is taken by bottom trawl, while the remaining part is caught by gillnet, long-line, Danish seine and hand-line. In Norway, about 30% is taken by bottom trawl.

An increasing proportion of the mature cod (skrei) is caught north of the traditional main spawning area in Lofoten. Much skrei is now caught along the coast from Lofoten to Sørøya (a traditional spawning area) and also on the coast of West Finnmark. This is not a new phenomenon, also in the period 1930–1950 there was such a northern distribution of the spawners. This is known from catch statistics (landings of cod and cod roe in different areas along the coast). In the period 1930–1950 the sea temperature was above the long-term mean, which is also the situation at present, and we believe this to be one of the main reasons why the spawning areas have moved northwards. 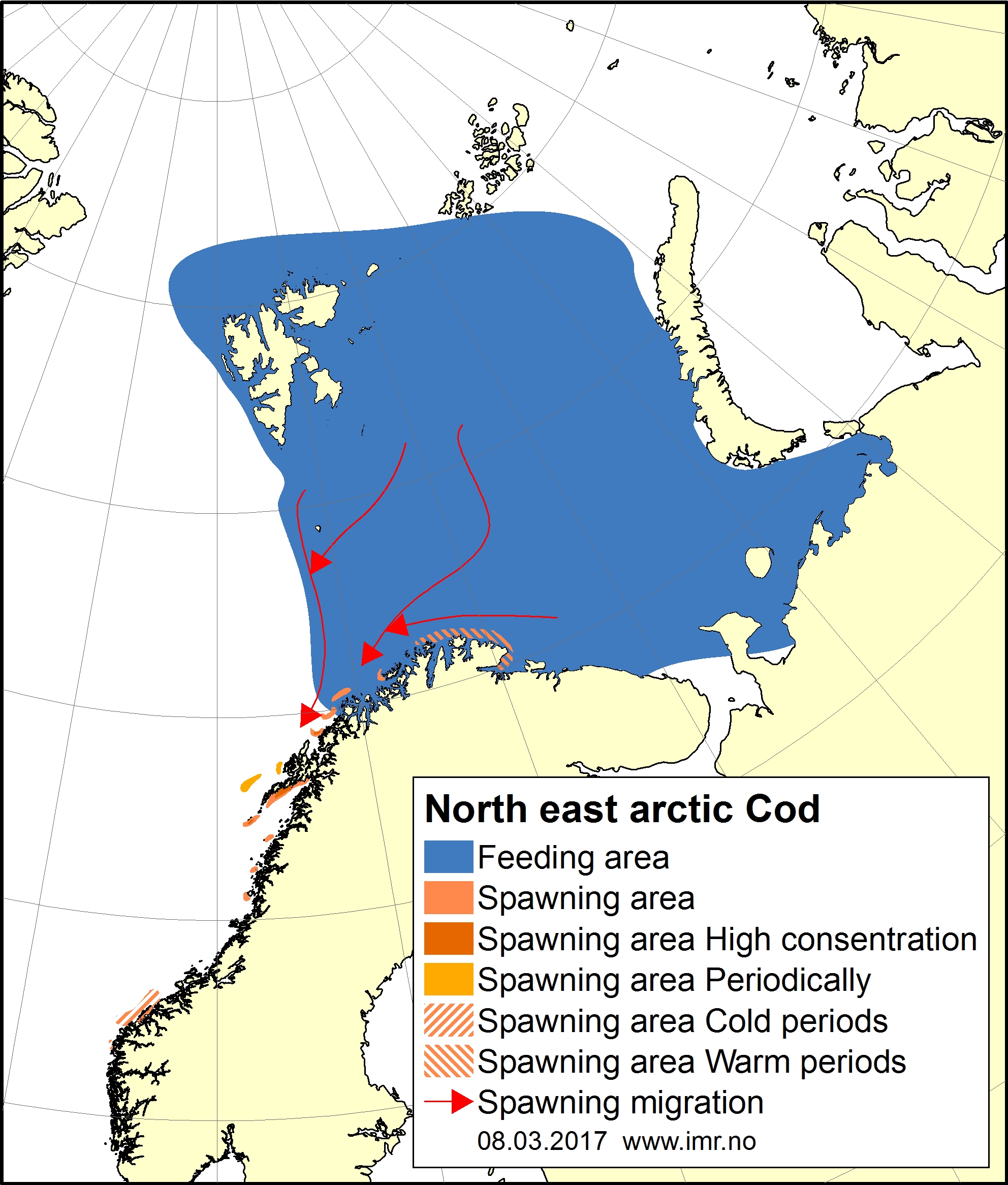