The Anguillidae family of freshwater eels is comprised of approximately 19 different species around the world.

Eels of the genus Anguilla are described as a catadromous fish, meaning that they spawn in saltwater but grow in freshwater. European eels (Anguilla anguilla) spawn in the Sargasso Sea. Their larvae drift with the Gulf Stream and become glass eels when they reach the continental shelf. After the glass eel stage, they become pigmented and are called yellow eels. These will live many years (up to 30 years) in freshwater systems. In the fall, they begin their sexual maturation and become silver eels which must migrate up to 6000 km across the Atlantic Ocean back to their spawning area in the Sargasso Sea.

The European eel during its continental phase is largely distributed between northern Norway and Morocco and is present far into the Mediterranean.

Some eels present alternate life-history strategies where they skip the freshwater phase and spend their whole life cycle in coastal areas or shift between freshwater and saltwater habitats (semi-catadromous behavior). This has been demonstrated through the analyses of otoliths from European eels and other eel species around the world. In general, eels can easily adapt to different environments with completely different salinities, temperature, substrate, depths, and other environmental conditions. It is unclear what determines the eel’s life strategy, but habitat shifters and marine resident eels tend to be more common in the northern part of the distribution area. In Norway, eels appear to live predominantly in salt and brackish water.

Eels have been documented to occur in 1,788 different rivers and lakes distributed across Norway, but since many areas and habitats have not yet been studied, this estimate should be considered a minimum. Eels occur in areas along the entire Norwegian coast, but in decreasing numbers proceeding northward.

The European eel has been on Norway’s Red List since 2006. and was categorized as Critically Endangered until 2015, when its status was reclassified as Vulnerable. In the rest of Europe however, it remains Critically Endangered. This is due to its long-term decline in many countries over several decades. Causes of the decline are multiple: overfishing, loss of habitat, pollution, and man-made barriers, e.g., eels migrating downstream suffer mortalities and injuries from turbines at hydro-electric dams. In 2008, plans were initiated to protect eels, and knowledge gaps were identified. In Norway, efforts to manage this species prompted a decision to ban eel fishing in 2010. In 2016, a small-scale research fishery was started to document the status of the local stock.

Over the years, many theories on how eels navigate this long and difficult journey have been postulated, including using stars, the coastline, their sense of smell, and the ocean currents. Several studies have now shown that eels possess a magnetic compass that help them to orient at different stages of their lifecycle. Silver eels are able to use the Earth’s magnetic field, but also glass eels during the last stage of their migration towards coastal habitats. These experiments have been carried out at the MagLab (magnetic laboratory) which is part of the IMR Research Station in Austevoll. More information can be found here: https://fishlarvae.org/facilities/magnetoreception-test-facility/.

Research is also being carried out to try and understand the drivers for the different life-history strategies: catadromy or semi-catadromy. In the project MAREEL funded by the Norwegian Research Council and IMR, we investigate why certain eels skip the freshwater phase or shift between habitats, using otolith microchemistry, fatty acid and stables isotope analyses. We also tag eels and use telemetry to study their seasonal movements. For more information about the MAREEL project: 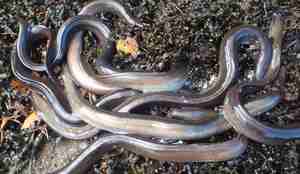 Latin name: Anguilla anguilla
Genus: Anguilla
Maximum size: 133 cm 6 599 g
Lifespan: Variable, depends upon gender and environmental conditions. Typically 5–20 years
Distribution: From Africa/Canary Islands to Murmansk
Main spawning area: Sargasso Sea
Spawning season: Uknown, but likely March-June. The eel is a one-time spawner
Diet: Carnivorous, eating more-or-less everything
Distinctive features: Eel is strongly negatively phototactic (light averse). They can survive out of water for more than 24 hours and can move over land from freshwater to the sea at the beginning of their spawning migration.