Although the maximum size this species can reach is uncertain, individuals up to 350 kilograms and 3.60 meters have been captured. Previously, large individuals were regarded with great mystery; they were not used for human consumption and were never referred to by their actual name. In some locations, preparations for halibut fishing were taken very seriously. Although mysticism and superstition about halibut no longer applies, cautions persist to not eat the largest individuals. The flesh becomes coarse and a little dry; and older large fish accumulate pollutants, such as PCBs. At present, human consumption of halibut over 40 pounds is not recommended.

Halibut are quite localized and often spawn within a very limited area. Females lay up to 3.5 million eggs that are 3.5 to 4.2 mm in size. The eggs are fertilized on or near the sea floor; they then rise in the water column. Hatching occurs after 9–16 days, and the larvae are 6.5 to 7 mm long. When the halibut congregate around pits in the spawning area, they are easily caught by fishers. There have been examples of extensive fishing gear deployed at such halibut spawning assemblages having caused irreparable damage.

Halibut are extremely vulnerable to overfishing because of their slow growth rate (in relation to age at maturation and age at maximum size), late sexual maturation, and dense assemblage in spawning areas. In addition to minimum mesh size regulations, fishing for halibut during spawning season – 20 December to 31 March – with nets, trawls, and seines is prohibited.

Effective measures to ensure that the population rebuilds to a sustainable level, require detailed knowledge of population distribution, migration patterns, spawning behaviour, and other biological characteristics. However, current knowledge of halibut biology and distribution is limited. In particular, spawning behaviour and larval movements remain a mystery. Despite numerous plankton surveys, halibut larvae have been observed twice in Norwegian waters.

Latin name: Hippoglossus hippoglossus
Family: Pleuronectidae (flounder family)
Maximum size: Females over 3.5 m / 300 kg – Males up to 50 kg
Lifespan: Up to 60 years. Females can live significantly longer than males
Living area: Young halibut live along the coast in relatively shallow water. Older, larger halibut also occur in the open ocean.
Distribution: Occur on both sides of the North Atlantic; offshore Newfoundland and Labrador; from Cape Cod (USA) to the northwest coast of Greenland; off East Greenland and Iceland; from Svalbard to Novaya Zemlya; and southward towards Biscay.
Spawning area: Takes place at 300–700 m depth; in deep pits on the fishing banks along the coast and fjord areas.
Spawning season: From December to May.
Diet: A predatory species that eats bottom fish such as tusk, cod, sculpin, and haddock, and pelagic species such as herring, capelin, and squid. 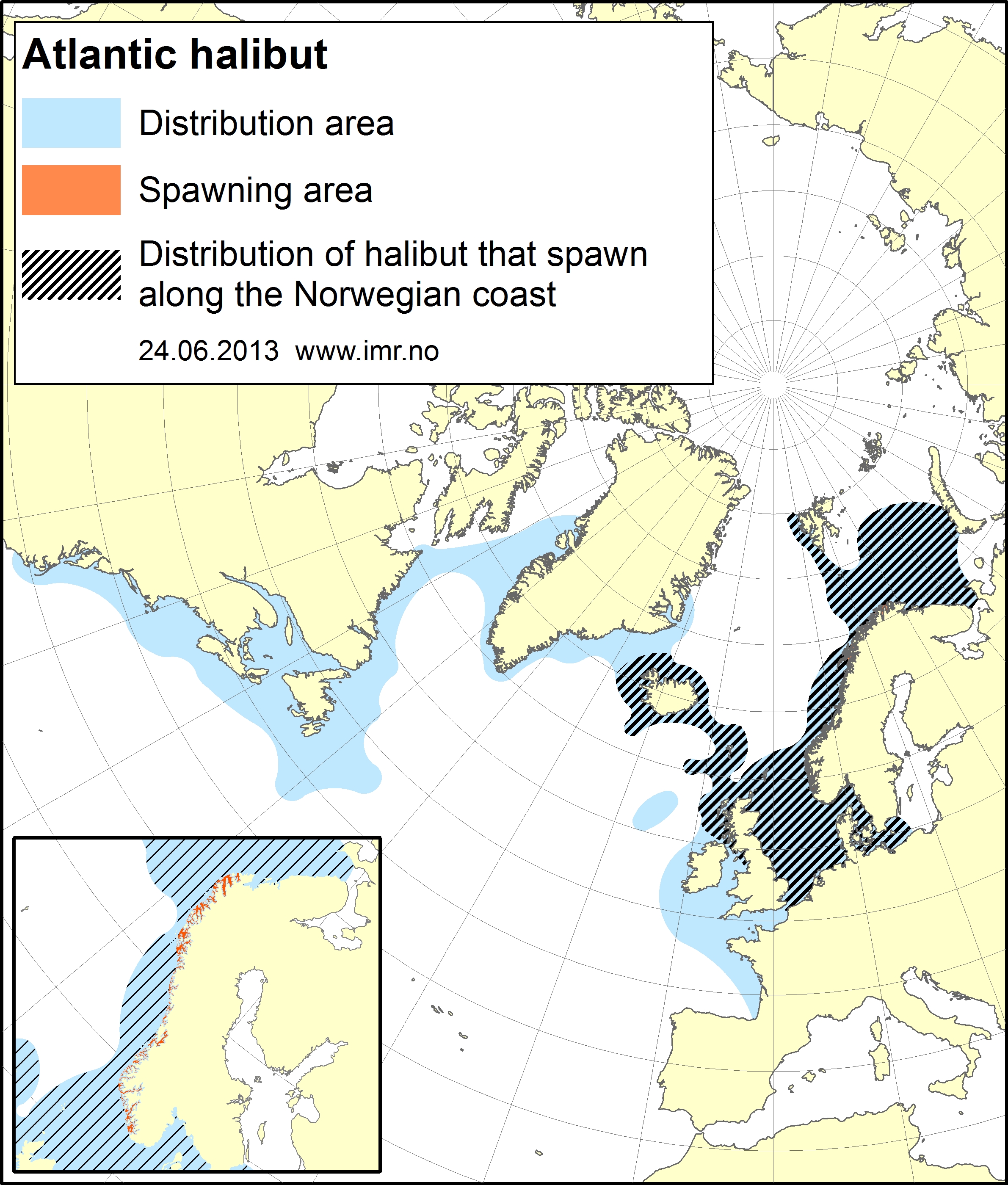