Hooded seals are widespread in the Arctic parts of the North Atlantic. Adults gather in patches in the drifting pack ice during the breeding period in March. Pups born on the ice, where they remain throughout the lactation period, which lasts for four to five days.

Hooded seals are proficient divers, and while the majority of dives reach 100–600 meters, deepest dives can reach well over 1000 meters. The species is believed to mainly feed on squid, but also take capelin, polar cod and deep-seabed bottom fish such as redfish and Greenland halibut.

Like other Arctic seals, hooded seals build up energy reserves, mostly in their blubber, during extended feeding at sea. These built up energy reserves are expended rapidly during breeding and moulting periods on the ice, during which they feed very little. At the end of these two periods, the blubber layer is therefore substantially reduced, and seals again have to return to sea to replenish their stores.

The breeding range of the Greenland Sea stock lies between Jan Mayen and Greenland. During the breeding period, females gather in loosely organized breeding patches to nurse their pups on the ice, while males compete amongst each-other for the right to accompany a female and her pup on the ice.

Females remain with their pups on the ice during the short lactation period and defend their offspring intensely against all intruders, including adult males should they get too close. The victorious male in a battle, end up joining a female with young.

The sealers have always called such trios a “family” – in modern terminology this is not far from correct, since the male is very likely not the father of the pup he is accompanying. However, since mating occurs immediately after weaning, probably in the water, it is almost certain that he will become the father of the female's next young. After weaning and mating, females abandon their pups, who must learn to find food and survive by themselves.

In April, adults depart from breeding grounds in the pack ice in the hunt for food, but from mid-June to mid-July they again gather to moult on drift ice along the east coast of Greenland.

Outside of the breeding and moulting periods, hooded seals undertake repeated feeding migrations of one to three months to remote areas southwest of Iceland, west of Ireland, around the Faroe Islands, along the continental shelf edge off the Norwegian coast and all the way north to Svalbard and occasionally even deep into the fast ice. 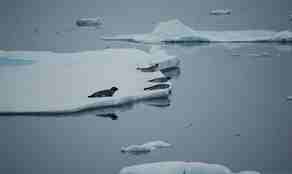 In 2018, a counting survey was carried out to estimate the pup production of hooded seals in the Greenland Sea. The result (just under 13,000 pups) was not significantly different from the counts made during similar surveys in 2012, 2007 and 2005, but significantly lower than in 1997.

These latest figures indicate an estimated total population of around 77,000 animals. Greenland sea hooded seals decreased significantly from the late 1940s until around 1980. After this it appears that the stock has now stabilized at a low level, which is probably no more than approx. 8% of the level 75 years ago.

In the traditional Norwegian sealing activities in the Arctic Ocean, hunting bluebacks (hooded seal pups) in the Greenland Sea has been an important component. In the decades leading up to 2005, ICES considered the low catch levels sustainable. The observed decline in pup production, and generally low stock levels over several decades, led ICES to conclude that continued catching may prevent the stock to recover, or in worse case be reduced even further. All hooded seal catches in the Greenland Sea were therefore stopped as of the 2007 season. Exempt from this prohibition is a limited catch for scientific purposes. The joint Norwegian-Russian Fisheries Commission has followed the advice of ICES, which is also in line with the Institute of Marine Research's recommendation. The moratorium on catches will continue in 2020. Historical catches of hooded seals in the Greenland Sea for the years 1946–2019 are given in the figure below, which also shows modelled population trends: 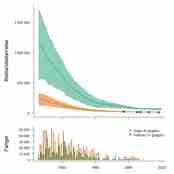