Researchers have combed data from almost 500 fish farms all over Norway. They found only a weak and variable effect of using cleaner fish in the battle against salmon lice.

The researchers had previously reviewed past studies of the efficacy of cleaner fish and found large gaps in our knowledge. In a new study, they have now analysed the figures for cleaner fish and salmon louse levels reported by the aquaculture industry itself.

“There was no clear difference in louse levels between farms that used lots of cleaner fish and ones that used few of them. Perhaps this is because they are mainly used reactively, so their use is linked to the size of the louse problem at the farm”, says researcher Lars Helge Stien.

Together with Norwegian and Australian colleagues, he has analysed data from 488 Norwegian fish farms that started and completed a salmon production cycle over the period 2016-2018.

“We also observed that some farms which deployed large numbers of cleaner fish achieved a clear effect for 10-20 weeks, but then louse numbers started to rise again. That suggests the cleaner fish either stop eating the lice, escape or die within a relatively short period of time”, he continues.

Can wait longer before delousing

However, the news wasn’t all bad. The researchers found that farms which use lots of cleaner fish early in the production cycle can wait longer before needing to implement other delousing measures. Deploying cleaner fish also slightly restricted the growth of the louse population in the sea cages.

Overall, however, those effects were small and variable.

In another recent study, researchers went through earlier research on the effect of using cleaner fish to eat lice at salmon farms. The study also concluded that there was a need to better document how these little helpers can be used effectively.

“We need a better understanding of why some farms are successful with cleaner fish, so their use can become more targeted and fact-based. That requires knowledge obtained from farms that have successfully used cleaner fish to reduce louse numbers to be documented and shared”, concludes Stien.

The study was recently published in the International Journal for Parasitology as a collaborative project between researchers at the University of Melbourne and the Institute of Marine Research. You can read the whole paper here.

The study uses data from localities across Norway covering all species used as cleaner fish. 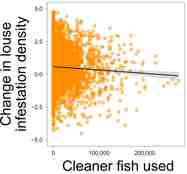 Correlation between the number of cleaner fish used and change in louse infestation density, as shown in the study.