Topic: Capelin in the Barents Sea

Capelin is a small pelagic fish with distribution in the polar and subpolar regions of the northern hemisphere. Capelin is a typical pelagic shoal fish that feeds on plankton organisms and is an important prey for predators higher up the food chain, especially cod. Capelin in the Barents Sea are semelparous, i.e. they die shortly after spawning.

In the Northeast Atlantic, capelin cannot be confused with other species, except for perhaps sandeel, which resembles a little in body shape, but is much more pointy-nosed. Capelin is a central organism in the ecosystem that effectively grazes on plankton and itself is important food for a variety of predators. First and foremost, cod eat a lot of capelin, but also harp seals, various whale species, seabirds and other fish have capelin on the menu.

Large mouths and well-developed gills allow the capelin to graze effectively on plankton organisms such as small copepods, krill and amphipods. Small capelin graze preferably on copepods while the capelin from they are about 10–12 cm graze more on larger plankton, especially krill. In the summer, the capelin migrates north and east in the Barents Sea as the ice retreats northwards, grazing in these plankton-rich areas throughout the autumn. In the late autumn, the fish migrate south, and in winter the population is south of the polar front and the ice edge.

The capelin which reach a length of about 14 cm during the autumn, begins to mature and spawns the following spring. The mature part of the capelin population migrates towards the coast in January-February, and typically reach land at the beginning of March. They then spawn along the coasts of Troms, Finnmark and Kola. There is also some spawning later in the year, so-called summer spawning, mostly in Eastern Finnmark and eastwards on the Russian side of the border.

The spawning takes place at the bottom, mostly at depths from 20–60 m, where there is sand and gravel. The eggs stick to the bottom and lie there until they hatch after a month's time.

After hatching, the capelin larvae reach the upper layers of the water and drift with the current from the coast and eastwards, and in the summer, they are spread over large parts of the central and eastern Barents Sea. Young capelin that are in the first and second years of life are normally distributed further south in the Barents Sea than older capelin.

Due to the short life span of capelin and years of recruitment failures, the capelin population is very fluctuating. Four population collapses have been observed since measurements began in 1971. The fishery after capelin is closed during the periods of collapse. During periods of higher populations, fishery is allowed, but the regulations state that the capelin consumption of the cod should be taken into account in the advisory on capelin, and in practice the fishery should only occur on the surplus after the cod has been supplied. I recent years there has been a weak capelin recruitment in addition to a high cod population, so there has only been opening for a fishery in one of the last 5 years.

When the stock of capelin in the Barents Sea has good recruitment and survival, this is the world's largest capelin population and it is widespread throughout the Barents Sea, with the main distribution area in the central parts of the Barents Sea east of Svalbard. There are also other capelin stocks in the northern parts of the Atlantic and Pacific Oceans, the most important ones located at Iceland/East Greenland/Jan Mayen, Newfoundland and in the Bering Sea. We also have some small populations that are different both morphologically, physiologically and genetically from the large populations; one of these is found in Balsfjorden in Troms.

The mapping of capelin in the Barents Sea started in the 1960s, and the effort increased significantly in the early 1970s, when the echo integrator came into use. Since then, the Institute of Marine Research has carried out annual surveys of the abundance and distribution of the capelin in the Barents Sea. From about 1980, the surveys have been conducted in cooperation with the Russian Institute of Marine Research PINRO in Murmansk.  In some periods, there have been several surveys per year; in winter, during the spawning, on the spawning fields, on the larvae distribution areas in June and August, in addition to the main cruise in September–October, which has been carried out continuously since 1971. As of 2004, the capelin mapping has been carried out as part of the large ecosystem survey in the Barents Sea and this autumn coverage is the only basis for the assessment of the capelin stock. A systematic experiment of monitoring the spawning capelin in February–March is currently carried out by the Institute of Marine Research to evaluate whether such a cruise can be used to improve the capelin assessment and advice.

Since Norway has a fishing zone around Jan Mayen, the nation also has a quota share on the Iceland–Aust-Greenland–Jan Mayen capelin stock. The Institute of Marine Research has not regularly participated in monitoring and research on this capelin stock.

Latin name: Mallotus villosus
Family: Osmeridae
Max size: 20 cm and 50 grams
Lifetime: Seldom more than 5 years
Habitat: The Barents Sea
Main spawning area: Coastal near Troms, Finnmark and the Kola peninsula
Spawning time: March–April
Feed: Plankton
Distinctive features: The name has been given because the male gets a strip of hairy outgrowths along the side prior to spawning. 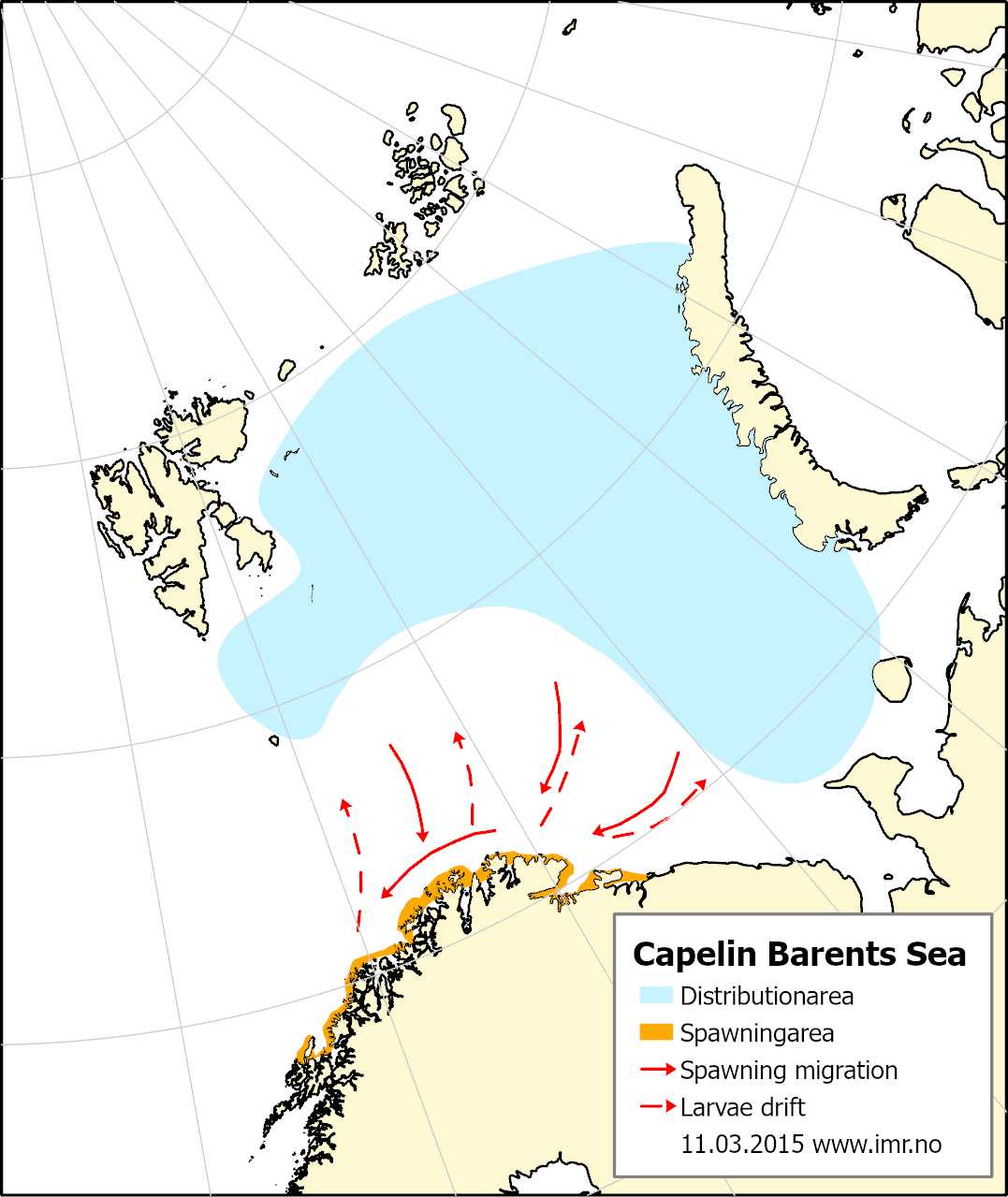