The Atlantic salmon is an anadromous fish. They spend their first years in freshwater, and when they are big enough they undergo physiological and morphological changes, and migrate into seawter as a ’smolt’.

The smolt migrates from the rivers, throughout the fjords and into the open seas where they spend one to four years. In this period they grow fast, and when they are sexually mature, they migrate back to the river where they were born, to spawn.

Normally the salmon return to the river where it was born, and in larger river systems to the specific part of the river where it was born. This is called homing. The mechanism behind this homing it is still not fully understood. It has been proposed that the salmon use its smell to be able to orientate itself during the later part of the migration. The theory is, however, debated and it cannot explain how the salmon finds its way over the seas. New research indicate that complex signals from several stimuli is imprinted by the smolt on its migratory route, making it possible to find the way back to the river.

When the spawning time approaches, the female choose an area with good current and coarse gravel. Several males can compete and fight over the female. These can also be accompanied by several young males. These males, which are called precocious males, are maturing without first entering seawater. They are trying to ’sneak’ under the female to fertilize her eggs. This strategy has been shown to be very effective, and a high proportion of the eggs can be fertilized by one or several precocious males.

During the spawning, the female bury the eggs in the gravel by powerfull beats with her tail fin. The eggs are buried in the gravel until they hatch in early spring. In the first months after hatching the larvae do not eat, but live of its yolk sac.

Some of the adult fish die after spawning, but some of them survive and stay in the river over the winter. In the spring, they migrate out of the river and into the sea to feed. Some individuals can return to the river to spawn several times.

When the small salmon emerge from the gravel it is called a fry. When they grow a little bigger they are called parr. These parr live in the river for at least one year before they migrate into the sea. The time they spend in the river is dependent on the temperature and food availability. In cold rivers as in glacier rivers in Sogn, the parr can stay as long as five years in the river.

When the parr reach a size of approximately 11–12 cm, it is ready for the smoltification process which change the salmon from being a freshwater fish to a seawater fish. In addition to all the physiological changes this transition involves, the fish also change its appearance from being brownish/greenish to being slim silvery and herring like. The salmon undergo the smoltification process during late winter and spring and migrate into seawater in April–June. Some salmon populations spend their whole lifecycle in freshwater. In Norway, we have two such examples, ‘Blega’ in Lake Bygland in Southern Norway and the ‘Namsblank’ in river Namsen in mid-Norway.

After leaving the river, the smolt migrates fast into the ocean. The mortality is very high during the first year in seawater, and a high proportion of them never reach the open sea. In the ocean, the salmon spread out over large areas, but the highest concentration are found close to the Faroe Islands and West Greenland. Salmon from different regions and rivers have different migration routes and feeding areas in the sea.

Some of the adult salmon mature sexually already after one year in seawater and return to freshwater to spawn. These are called grilse and are normally between 1 and 3 kg. The rest of the adult fish stay in the sea for two or more years before they return to the river as large salmon.

Latin name: Salmo salar
Other english names: Fry, parr, smolt, jacks, grilse
Family: Salmonidae
Maximum size: Up to 150 cm and 40 kg (males)
Life span: 2–8 years
Distribution: Lives in rivers on both sides of the Atlantic ocean, from Spain to Northwest Russia and from Maine to Northern Canada. A separate population lives in the Baltic. In the marine part of its lifecycle the salmon is spread over large parts of the Northern Atlantic ocean.
Spawning area: Rivers
Spawning time: October–January
Food: Juveniles in freshwater; mainly insects. As smolts and postsmolts in seawater; plancton and fish fry – and as larger salmon; shrimp, pelagic fish (herring and lanternfish)
Predators: Birds (e.g. Mergansers), coalfish, pollack and cod. In some areas sea mammals.
Special features: The salmon is andromous, i.e. it is born and lives in freshwater 1–5 years before it smoltifies and migrates into the ocean. It stays in the ocean for 1–4 years before it returns to the river to spawn. 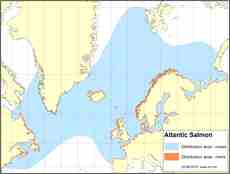