MAREANO is an interdisciplinary program carried out as a collaboration between the Mapping Authority ( Kartverket ), the Geological Survey of Norway (NGU, in Norwegian) and the Norwegian Institute of Marine Research (IMR). The Program implementation is led by the Program Group, with representatives from five directorates and the three above-mentioned executive institutions, while a Steering Group (Ministry of Industry and Fisheries, Oil and Energy, Climate and the Environment, Transport and Municipalities and Modernisation) determines the mandate of the Program. The MAREANO Program started in 2005 with the first survey conducted in 2006.

The mandate of MAREANO is to provide knowledge that can address the needs identified in the Management Plan for the Barents Sea and the sea areas outside Lofoten, as well as the Management Plan for the Norwegian Sea (St.meld. no. 8 2005-2006/no. 10 2010-2011; no. 37 2008-2009). The data derived from field work and subsequent lab analyses are stored digitally at the Institute of Marine Research in the Marbunn database. Resulting data products are shared on www.mareano.no.

The objectives of this cruise are: (1) to collect baseline data prior to any construction of wind turbines outside Utsira Island (Utsira Nord), including data from the offshore wind area itself and an adjacent control area (Utsira Kontroll), (2) to provide evidence for the selection of the Særlig Verdigful Område (SVO) known as “North Sea and Skagerrak 4”, henceforth NS4.

This cruise was carried out in combination with a Frisk Oslofjord (henceforth FriskO)-funded survey at Hvaler National Park, which was conducted on days 24-28 October. The objective of this part of the cruise was to collect data that can be used to determine the distribution of management-relevant habitats ( forvaltningsprioritert natur ).

In MAREANO geological, biological and chemical sampling cruises are conducted according to the following scheme:

1. The mapping agency supplies detailed depth data based on measurements with multi-beam sonar for the area which will later be mapped in terms of biology, geology and chemistry.

2. NGU processes data from multibeam sonar and produces maps of bottom reflectivity. Based on the bottom reflectivity data, the detailed depth data and a preliminary habitat type modelling/classification, this forms the basis for station planning.

3. The Institute of Marine Research and NGU select points (stations) where collection of field data is carried out, i.e. sediments and benthic fauna using video and physical sampling.

About 20% of the stations are selected based on subjective criteria, where bottom types and terrain formations are decisive for the station location. For the remaining group of stations, the emphasis is on representativeness for the relevant field areas.

Infauna, or animals that live in the bottom sediments, are collected using VV with a collection surface of 0.1 m2 shallower than 500 m, while a larger grab, 0.25 m2, is used at greater depths. Animals larger than 1 mm are seaved on board and preserved for further use in MAREANO. Five and two samples are taken respectively per station so that the total area is 0.5 m2, which is in line with recommendations given by Norwegian Standards and the Norwegian Environment Agency. Samples for analyses of the biological auxiliary parameters TOC, TOM, TN and grain size are mainly taken from BC samples.

Epifauna is collected using a 2-meter-wide BT with a 4 mm mesh size. The towing time on the bottom is 5 minutes at a speed of 1.5 knots.

Hyperbenthos – which mainly consists of crustaceans living on and just above the bottom – is collected using a 1 m wide epibenthic sled (RP) with a mesh size of 0.5 mm. The towing time on the bottom is about 15 minutes at a speed of 1 knot.

Megafauna, which are relatively easily visible and large animals, as well as geological observations of the bottom and bottom terrain, are documented using towed video that collects data over a straight line of 200 m. Direct observations such as bottom type, species, trawl tracks, litter, and GPS data are continuously logged using Campodlogger v. 3.0. The video rig is towed at a speed of 0.5 knots and with a camera distance to the bottom of approx. 1.5 m.

We conduct generally, two types of stations: video stations, where only the video system is deployed, and so-called full stations (FS) where all the above-mentioned gear types are deployed. In this cruise we have also conducted a station where only sediment cores were taken, both with the BC and the MC. This is a station where chemical data is available from 1992 and there was interest in revisiting it. 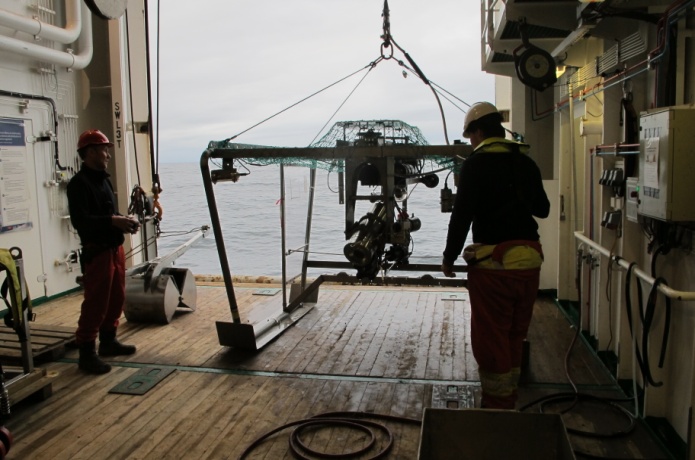 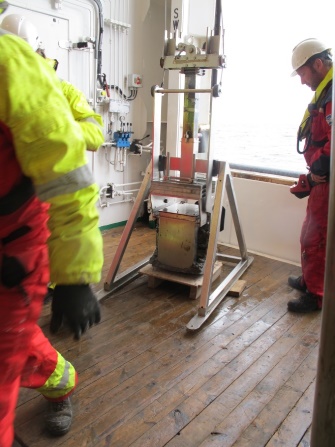 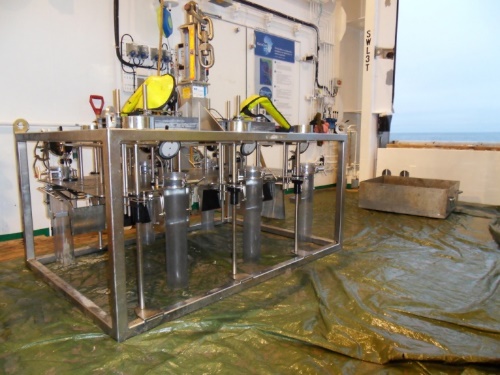 Station P152 (MAREANO) and F30 (FriskO) had been planned separately and turned out to be only 700 m apart. I decided to take only P152, but I still need to make sure that the data is available in both projects. In total this makes 104 stations completed, out of those planned.

In addition to these, we did 3 video stations at NS4 from the reserve stock. I picked those that were closest to the boundary of the 2022 area for geographic consistency reasons. In addition to that we did a MC station (associated to planned FS P7, but 1.5 km away), also because of its geographic position and time available. Note that by doing this, P7 got assigned a Reference number ( 3183).

We conducted a special survey of the Tisler reef, in Hv, which consisted of 11 specially designed video lines (amounting to 5300 m of towed video, so roughly equivalent to 26 regular video stations). This was not part of the original cruise plan.

We were able to sample a specimen of a seapen ( Styatula sp. cf.) with the VV grab. This is currently being investigated.

An unregistered shipwreck was found at the following position: 58.7650, 10.3247. It was about 40 m in length, laying in a north-south direction. It seems to have been split down the middle. Since it was outside the 12 nautical mile line, we took multibeam data of the site.

We reported it to Kystverket by email to Knut Markus Arnhus, who forwarded the information to The Norwegian Mapping Authority and The Norwegian Defense Research Establishment.

We also forwarded all our data (footage and multibeam) to Frode Kvalø, at the Norwegian Maritime Museum.

The new toktlogger system allows great flexibility of use and a high degree of automation in reporting. It is recommended that we initiate the station ourselves.

It would be good to have an additional computer in the video room where we could either run our own Olex, and/or a GIS that can read a feed of GPS data. This is to avoid having to request the bridge to change their Olex screen for us, particularly in the North Sea where there is a lot of maritime traffic. A computer with GPS-enabled GIS (e.g. QField) would enable real time data capture and field verification, which would also save time when needs for maps arise in the field.

Need maintenance on all nine cod-ends.

When we drive the Chimaera, we sit in the video lab and observe fauna on two TVs. One is stuck on board G. O. Sars and the other is one that we carry with us for each cruise in a separate box. When there are particles in the water, these are dragged across the screen, and it is very difficult to see what we are supposed to observe. During this cruise, instrument tried to change settings on the TV on multiple times. This screen has become too old and should be replaced.

As it is today, there is almost no use in the screen, and we mainly used the one that is stuck on board for our observations. Nevertheless, there is a strong need for this screen during the dives in order for everyone who sits annotating fauna and geology to have good working conditions (the room is not large and when everyone has to look towards the same screen we quickly get in the way of each other).

We used the Seabed Field Observer to collect data at the Tisler reef and were satisfied with the result. We mostly made use of its ability to record seabed features continuously, but also used it to annotate individual species. It shows great potential for targeted surveys like the Tisler reef survey. However, it is recommended that it be used on a computer, rather than on an ipad. Video work is conducted in a lab with all scientists sitting down and plenty of desk space available. There is no need for a portable device like an ipad. Also, the ipad screen is rather prone to making mistakes, as we need to keep our gaze on the main monitor, and therefore it is easier to click with a mouse, than to tap on a screen (we found our fingers slipped easily to the wrong button!).

Another trunk to store literature

6 - Summary of all activities

A summary of all activities carried out at sea is presented in the following table, where each completed station is summarized by its planning number (P number), which gear types were used (“v” = regular video line, “v-long” special video line, “all” = CTD, video, VV grab, BC, MC, BT, RP), whether a sample was taken for emerging contaminants, its depth when known, the Reference and Video Line numbers assigned, and anything else that was noteworthy. Keep in mind that all other details can be extracted from Marbunn. The approximate time (CET) at which the activity was finished is included for some activities for calibration purposes. All exact (UTC) times can be extracted from the toktlogger files.